Nafplio is just two hours south west from Athens, and is a place where the Athenians go for a weekend getaway. It is filled with bits of history since it was the capital of Greece at one point. We met up with Athina who took us on a historic walk through the cobble stone streets with ancient buildings and one spectacular new building which included an elevator ride up the middle of a small rock mountain to a very nice hotel.

The historic downtown of Nafplio has a Venetian feel to it, since it was originally ruled by the Romans. The streets were narrow with flowers which made for beautiful walking paths and places to stop for a coffee and a little wifi. 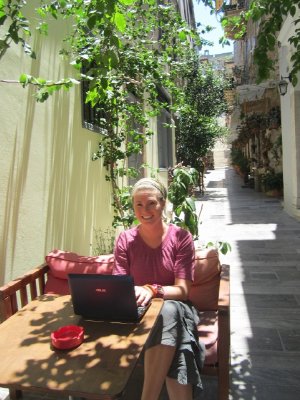 Nafplio is surrounded by crystal clear blue water with lots of options for swimming. We borrowed some bikes from the town hall and cruised the city and the surrounding beaches. One beach looked really close on the map but ended up being up a monster hill climb, even so it was worth it because we found a beautiful short cut on the way home that went around the mountain and along the water. 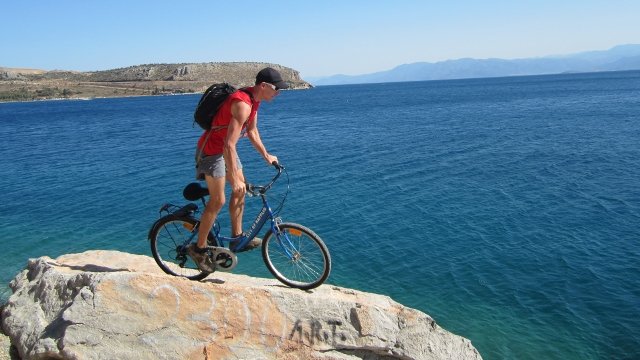 The skyline of Nafplio is dominated by a fort that was built in the 18th century to protect the town. In order to reach the fort, legend has it that you must climb 999 stairs (by our count it was actually 912). We took this challenge with our new friend Havier and hiked to the top twice! The views from above were amazing, as well as the maze of walls, prisons, reservoirs, and secret staircases inside the fort.

We left Nafplio with a new legend; it can now claim that it was the town where Kevin turned 35!! 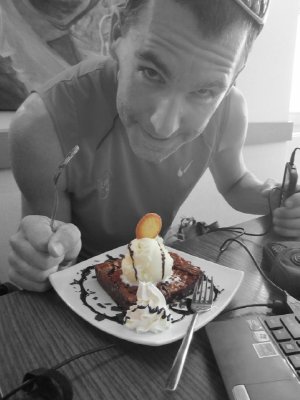 Posted by Robin-and-Kevin 01:02 Archived in Greece

Happy birthday Kevin !! You're a grown up man now

These are some of the most beautiful photos yet! Ah I miss the ocean

And yes the brownie looks amazing and the town looks quaint. Happy birthday Kevin, and keep up the smiles both!