Zeus and his Games

Since we are heading to the Olympics in August, we thought we would get a little refresher on the history of the games prior to our arrival in London. The ancient ruins in Olympia are mostly destroyed, and leave a lot to the imagination. However, the stadium where the athletic events were held is still in good shape (probably because it only consists of grassy slopes and a track). We walked around the site humming “chariots of fire” and challenging tourists to race across the first ever Olympic games track. 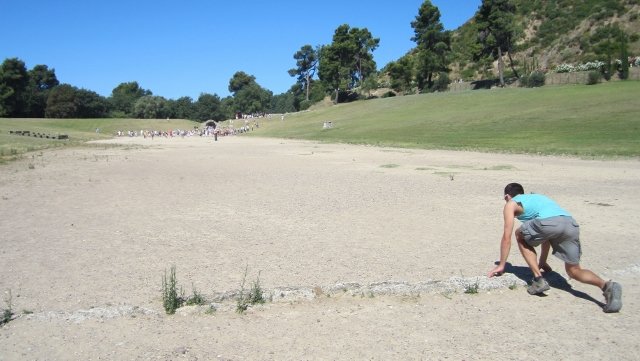 We saw loads of tourists taking pictures with this gravestone looking thing so we decided we should get a pic with it, however we kinda forgot to ask someone what it was so if you have any ideas, please let us know! 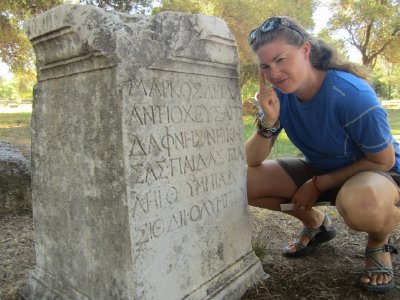 The city is small and seems to exists solely to cater to the tourists so there are lots of museums including one of ancient Olympia, the museum of the Olympics, an exhibit on ancient Greek mathematical tools, and a museum on the archeology finds and digs around the area. One of the most interesting museum pieces was an ancient tiled floor from the baths that was still intact that they covered by glass so you could walk over them… it depicted the different types of events that were held in the ancient games, including the pankration (a wrestling & boxing combo) and the hoplitodromos (running with armour). 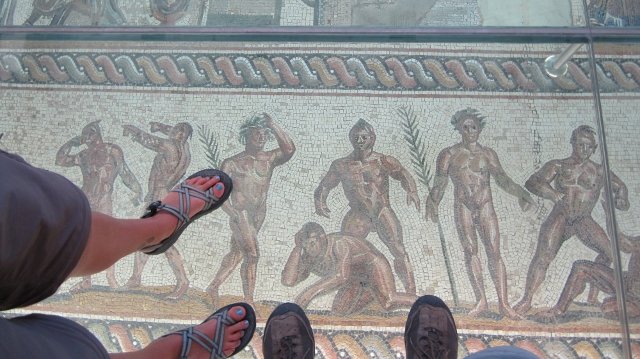 After all the tour groups had left for the day the city became a ghost town once. We sat down for a beer, frappe, in an alley for a game of backgammon. Turns out that Greeks love to play and it’s all over the streets and bars... we were amazed at how fast people could play the game (we are still workign on the strategy part - but fun none the less). 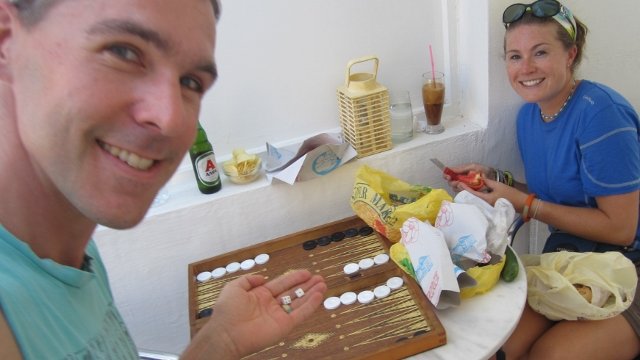 Posted by Robin-and-Kevin 15:02 Archived in Greece

Yo! not sure why the tourists were flocking around that tombstone-like monument. From what I can tell it means: The stone says that Markos from the Antioheia of Dafni (there were many cities named Antioheia, this one is the famous Antioheia of Syria) won the sport of wrestling in the 219th Olympic games and he dedicates his victory to Zeus and the Olympian gods.
My source is a forum page where two guys are debating it, see: http://www.twcenter.net/forums/showthread.php?t=228342&page=1
this rather dubious looking site (http://www.tmoti.org/museum_of_olympian_truce.htm), suggests the correct translation is Marcos of Antioch. Which, hey, is not too far from Hella Hayward, right?
But, I don't see why it would be any more important than any other victory monument.
-Trenton

This is great, I always love the photos!