Life on the Mediterranean… literally!

Thank the Greek gods, Dionysis and his wife Georgia hosted us in their small village (Kaminia) near the port of Patra because Patra was basically a rundown ghost town. Maybe it was because of the time of year we were there, but basically nothing was going on in the town and although there were a few nice walking streets we were much happier at their place playing basketball with the kids. It helped that their place was literally right on the water, and every morning was started the day with a swim, and every evening we finished the day with another swim, beers and the neighbor’s olives against the sunset.

Dionysis had a Frappe maker, and upon arrival his sister whipped one up for us as a ‘welcome to our home’ gesture. We definitely had fun with this little machine and probably had way too much coffee while we were visiting. For those interested, we made a short instructional video.


We ventured out to Diakofto one day to see the famous Odotonos mining Railway that goes through the Kalvarita Gorge. The train ride is famed for the scenery and the sheer cliff drops on both sides of the train. The gorge is off the beaten track so most people who do this trip are traveling from Athens to Patra via car. So getting to Diakofto, taking the train one way and leaving from Kalvarita was a complete adventure requiring 5 bus trips in one day. Once we got to the base train station we decided to take the train up halfway, and then walk the last 9 km on the train tracks alongside the river. Neither of us had actually followed a train track for that long before, so it was quite surreal especially after just reading Water for Elephants (a book set on and around trains). 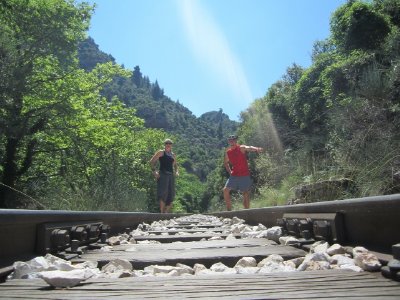 During our stay in Kaminia, the Greek soccer team played Germany in the Euro Cup. We went with Dionysis to watch the game in a nearby village where every square, street, ally, restaurant, bar, and café had a TV screen outside for people to watch. It was very exciting when Greece scored their two goals and fireworks were set off and we felt fortunate to be able to participate in a small town gone largely patriotic.

Posted by Robin-and-Kevin 01:20 Archived in Greece