Sleeping in a 'deck seat'

We thought we’d try to get on board our 16 hour ferry to Bari, Italy a bit early to score a good spot to sleep since our last boat seemed to have a mad dash of pushing and shoving. After a long walk with our backpacks on through what seemed like an endless line of semi trucks spewing out 100 degree heat onto the blacktop and dodging the stowaways trying to hitch a free ride into Italy we found ourselves on the other side of admissions without a soul in sight. 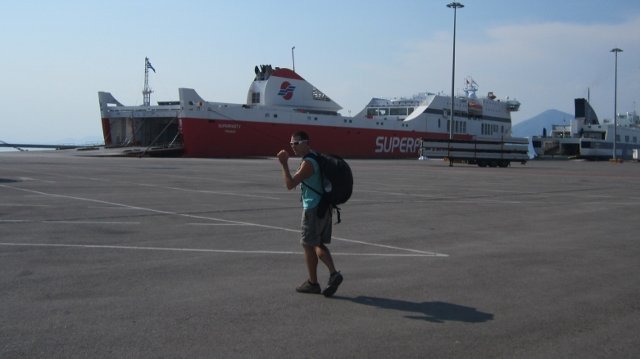 We said our sad goodbyes to Greece, which we had really enjoyed. We loved the feta cheese and olives sold at the delis in supermarkets, the ‘clear skin’ wine sold in plastic bottles, and of course – the frappes! Greece is a beautiful country with very friendly people and crystal clear water for swimming. We went cheap on the boat and paid for deck seats, apparently, no one else does for a 16 hour boat ride because we had the whole deck to ourselves! 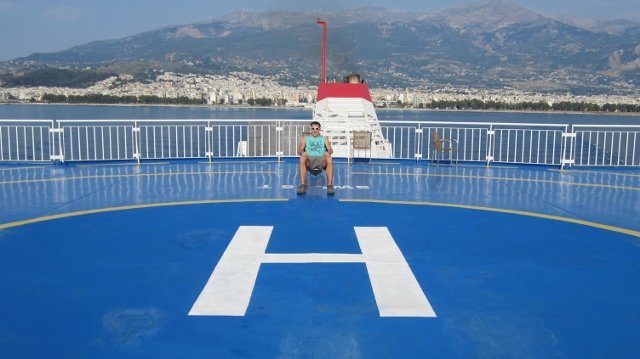 Just kidding! Actually, deck seats just meant ‘open seating’ in certain sections of the boat including the floors and other nooks and crannies that people have already been laying down sleeping their bags in. After already taking two ferries, we felt as though we were old pros and ignored the rush to get some good couch seats and instead found a spot in a stairwell that we though was pretty secluded and scored some nice floor space to sleep. On our way back from watching the Italy soccer team beat England with some very excited Italians, we were stopped in aww of our new neighbors who totally out did us with their sleeping bags, pillows and air mattresses.
Our spot: 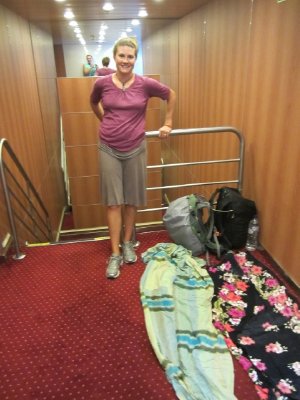 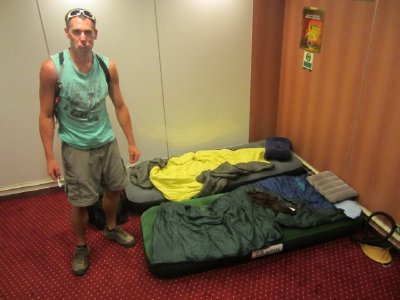 We became a bit envious and snuck down to some couches near the reception area and pretended to watch a movie (but really just tried to sleep). Just as soon as the shoes came off the conductors asked us to move but politely offered us the use of the air seats room (imagine airline seats). When boarding this was the only place on the ship that we were specifically told we couldn’t go into without upgrading our tickets so we hesitantly accepted the gesture but then ended up with most of the room to ourselves (since nobody seems to pay more for slightly relining airline seats).

Having a deck seat kinda feels like it would if you were in an open recess area at a prison (or maybe a kindergarden playground)… everyone is jockeying for position and you aren’t sure what the rules really are. With all the scheming we did to get a good sleep spot it really didn’t turn out at all like we planned but it in the end it all worked out. We have had a lot of different adventures trying to find a place to lay our heads at night and this one wasn’t too bad. Morning came, and we used our little pot to make some coffee and had a nice breakfast out on the deck, surrounded by the Mediterranean Sea. 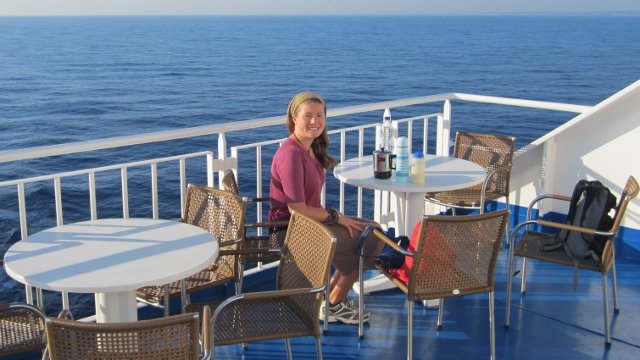 Posted by Robin-and-Kevin 00:54 Archived in Greece