Working on a Farm

Fortunately for us, a family connection accepted us into their home for a few days and we learned all about the different varieties of sheep and farming practices in New Zealand. Our bedroom overlooked a paddock (pasture) of sheep which dramatically lifted the ‘sheep I win’ game to a whole new level. The unusually wet weather for this time of year limited most of our time to taking down electric fences, feeding the deer, moving mobs of sheep, and herding cattle from one paddock to another… but fortunately we had a break in the weather for a solid day of lamb docking and a foggy morning of worm drenching. To spare the gory details, look up ‘lamb docking’ and ‘lamb drenching.’ The lambs we had to carry were only about a month old but had the strength, size and weight of an English Bulldog. They have all formed strong bonds with their mothers and follow them around everywhere, constantly calling out to each other when separated (we have a video of lamb calls if anyone needs a new ringtone, sweet as). 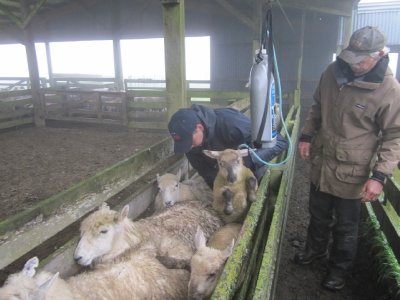 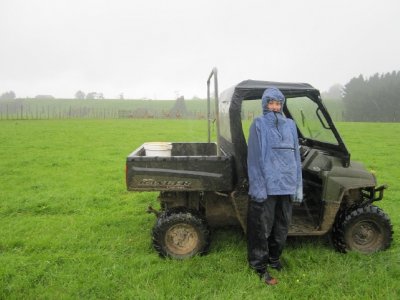 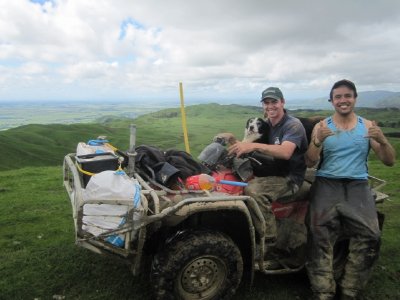 The farm is the 2nd oldest Registered Perendale breed Stud farm in NZ and covers over 2,000 acres and has about 8,000 sheep, 450 cattle, and 70 deer (which will increase to 100 once the fawns are born next week). The farm is a wee midsized farm compared to the large farms in the En-Zed (New Zealand) but seemed humongous to us. It took our hosts (Heather and Rob) three poster sized topographic maps just to show us all the land! 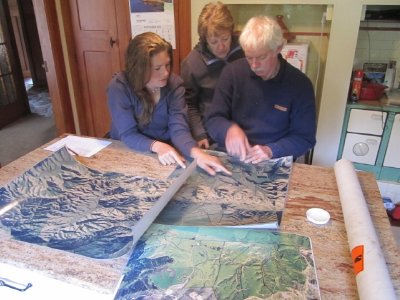 Also very interesting was that Rob kept a clear line of genealogy for the animals to avoid inbreeding and show authenticity for the stud (pure breed) Perendale. We learned more and more everyday about how little we know about farming and are extremely impressed with how efficiently the farm is run with just a father and son duo and a few hired hands when needed. The biggest eye opener to us was that livestock farming is actually all about harvesting and nurturing grass. All the animals graze on picturesque green grass and the paddocks are rotated to give the grass a chance to regrow. To keep the grass at the optimal height for sheep, Rob puts about a dozen cows in each paddock to keep the grass from over growing. Conversely he lets the grass get nice and tall in the red deer paddock so that the deer feel more comfortable giving birth under cover of grass. This tall grass is then harvested green and stored in sealed plastic bails to be fed to livestock in the winter. 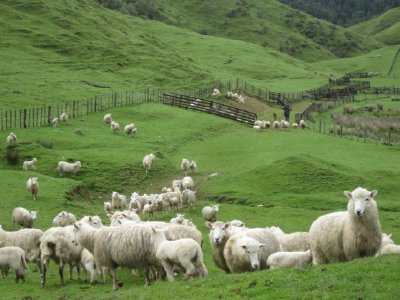 Each farmer has at least 2 dogs, a ‘speaker’ that uses barking as a tool and a ‘seer’ that uses glaring and approaching as a tool. Each of the dogs had their own specialty and were a total highlight to watch! They made mustering the mobs on a steep grade, possible and enjoyable. The oldest and smartest dog we met (Evo) was smart enough to tackle a lamb, pin it on its back and hold it in place for one of us to come pick it up. All of the dogs were absolutely knackered when we used them for docking and totally deserved their big chunk of sheep reward. 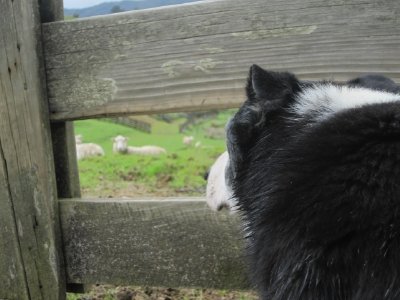 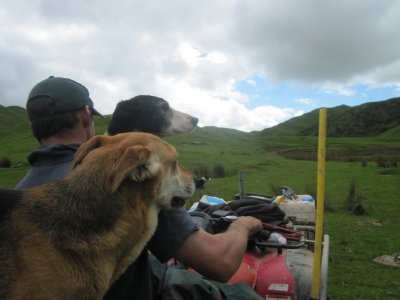 We also accompanied Rob to an agricultural and pastoral show (similar to a County Fair, but in the countryside). Rob brought some of his studs to the fair and won first and second in the hogget competition for Perendale sheep. We saw some of the best local sheep shearers, who can amazingly shear a whole sheep and end up with a full body ‘rug’ in 45 seconds…. a task that would probably take us an entire day. Sheep shearing and wool handling are way harder than they look and are prized skills; if you are good enough you can tour the world off of competition prize earnings. Pictured below is a perfect wool toss and the junior sheep shearers. 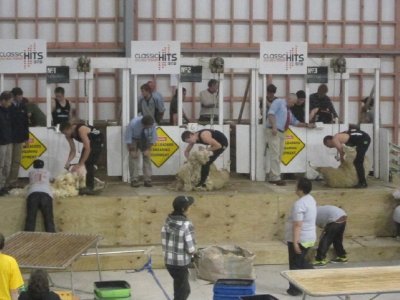 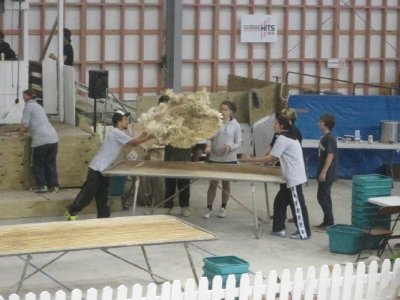 Our stay on the farm was short, and definitely leaves us interested in more, perhaps another farm stay in Australia or England… maybe on a lifestyle block in the future? Now it’s off to Christchurch to meet up with Damon, Justin, and Anya for our South Island campervan adventure. 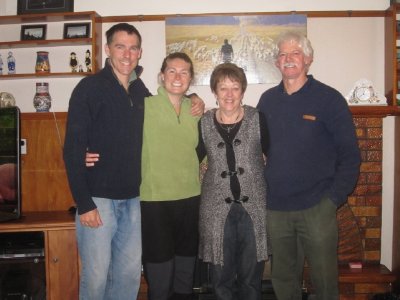 The Windy City that is Home to the Weta Cave

After eight days in our little campervan, we arrived in Wellington to spend some time with Kevin’s friend, Michal. We dropped the campervan off and toured the museums on the wharf. To our amazement, there were more museums than we could possibly see in one day, a few favorites were the Wellington museum of land and sea, the Olympic museum and the Te Papa.

Michal, Chris and 3-year old son Alex were gracious hosts and we learned that life boiled down to only two options; 1. Doing what needs to be done or 2. Go to bed! We also learned an amazing amount of barbequing skills from goat leg curry with fresh ground spices to Asian stir fry. We ate like royalty and felt like we were on the Master Chef show. 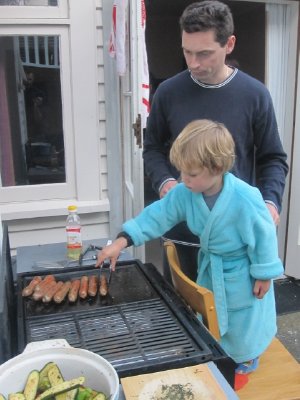 Michal owns the hippest doggy daycare and dog walk businesses in town (Hound Lounge and EmBarkers). We ventured on a few dog walks and attended the Halloween Trick and Treat party for her clients and their daaawgz. The dogs all came dressed in Halloween costumes and were enticed with doggy treats to learn how to perform a variety of tricks. 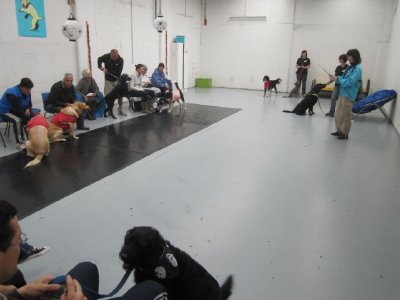 We got our first glimpse of a live Kiwi in the nocturnal exhibit at the Wellington Zoo where Alex showed us around as our tour guide. 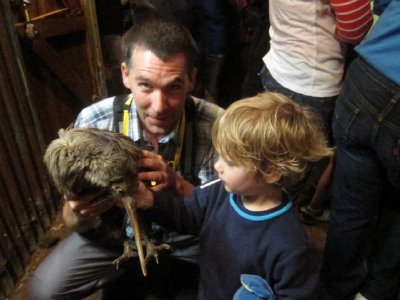 Wellington is famous for two things: wind and Weta Caves (production studio for Lord of the Rings). We explored the city via lovely walking trails and found flying fox (zip lines) play grounds scattered about. Although we felt like we had to walk at an angle to combat the gale force winds we had “an adventure to rule all adventures” when we arrived at Weta Caves and were greeted by Gollum. 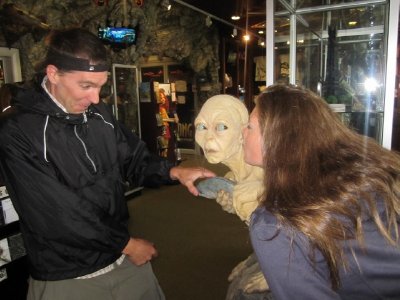 It was nice to relax and hang out with friends and ponder the little differences in how we live. One small example is how kiwis hang washed clothes on the line to dry even in the cloudy wet Seattle-like weather, but our HOAs specifically rule against them. 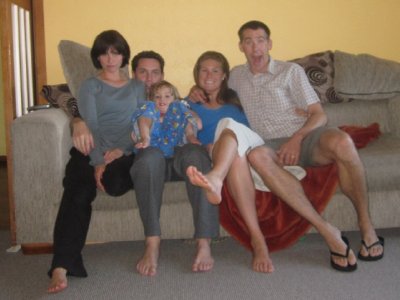 After a few days in Auckland, we settled into our two-person campervan and took to the road with our duty-free Fijian vodka. Note: people drive on the left-hand side in New Zealand AND the driver sits on the right side and shifts with LEFT hand! After a week on the road we can now safely say that we are on the left hand side of the rode most of the time. And luckily, the kiwis have already realized how confusing this is to the foreigners and have constant road markers that say “stay to the left.” Which is a pretty polite way of saying “you are most likely driving on the WRONG side of the road right now.” The “Cow I Win” game quickly turned into “Sheep I Win” and only lasted a few minutes each day but was still a pretty exciting way to start the day. 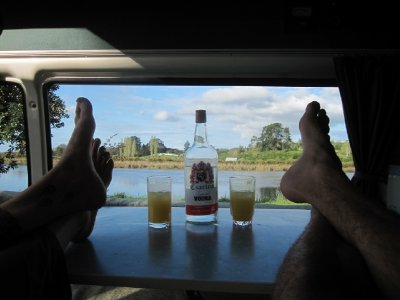 Our first stop along our week-long adventure on the North Island was to the quaint town of Coramandel up on a northern peninsula. We took the scenic drive along the coast and arrived in time to catch the world cup rugby semi-finals match in the local pub. The next morning we headed over for low tide at hot water beach. At this beach, you can dig a hole and create your own hot tub, or you can make friends with the locals and share/ take over someone else’s hot water bath (without a shovel, that is what we did). The water temperature was no joke and if you didn’t watch your step you were risking a serious burn! 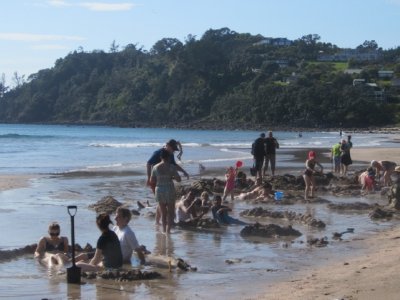 You may have heard of Tauranga, because it is one of the towns along the Bay of Plenty, where a large oil ship called the Rena hit a reef and is causing a HUGE environmental impact. We ran to the top of a mountain in this city called Mount Maunganui and could see the ship far off in the distance. The locals we chatted with were in good spirits but still quite pissed at the whole situation and hope the ordeal makes its way into NZ election talk. Along the beach, we were surrounded by army and navy personnel in white suits and boots collecting the oil deposits on the beach, and they told us that it was really hard work getting the beach reopened and they were just hoping the tides wouldn’t shift and re-soil the beaches they just cleaned.

We found out we were in the kiwi fruit capital of New Zealand when we saw a giant kiwi fruit on the side of the road. We stopped at the gift shop and sampled some wine, liquors, juice, and chocolates all made from kiwis. It was fitting that we had made kiwi pancakes for breakfast that morning. 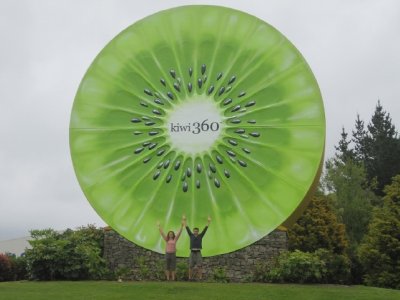 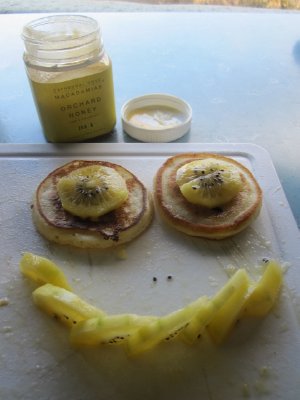 We headed south to Rotorua, which has the most geothermal hot spots (literally) of the entire country. Rotorua smells JUST LIKE a wastewater treatment plant (lots of sulfur)!! You can fart at anytime because the air smells like farts already. Much of the city is geared towards tourist attractions, but we found some beautiful walks and geothermal sites in the Government Gardens and Kiwainis Park. 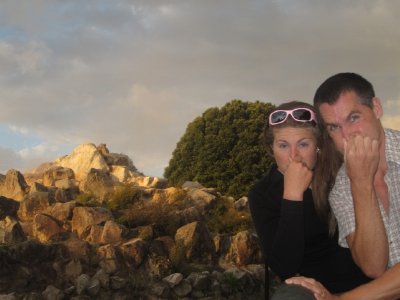 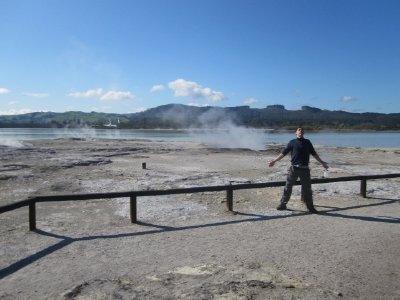 We ventured into Tongaririo and Whanganui National Parks to check out some the amazing beauty everyone raves about in NZ. This was when we started seeing the legendary film sites in movies like Kong and Lord of the Rings. We hiked between “Mount Doom” and “Mordor” in hopes to stumble across some 10 sided dice, but found a waterfall in some fog instead. The scenic drive along Whanganui River was similar to the Yungas road that we biked down in Bolivia, it could easily be “the most dangerous road in New Zealand” because it is narrow, along a cliff, unpaved, and has frequent logging trucks along it. We survived and had a great time, despite an absolute downpour along half of the drive. 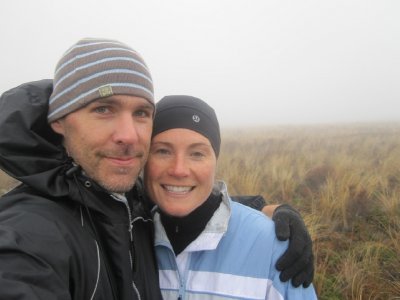 All in all we loved our little van and had an awesome time, but unfortunately the way of the wayfaring free camping in NZ is almost over. City limits are off limits for even self-contained (with toilet) vehicles, and info sites are discourage camper vanning with the recent restrictive laws being passed. We are now in Wellington, the capital of New Zealand, and home of one of Kevin’s friends, where we plan to rest, do some laundry, and have a real shower for the next few days prior to our stint on a sheep farm. 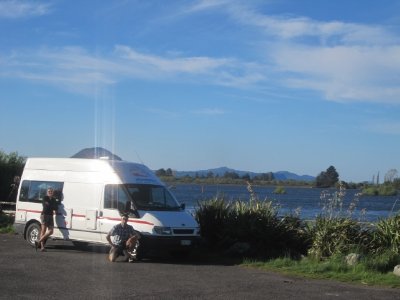