New York south of the border

The bus system in Mexico has been phenomenal. The terminals are like airport with gates and waiting rooms, and there are multiple daily departures to almost anywhere on plush new busses with lots of room. 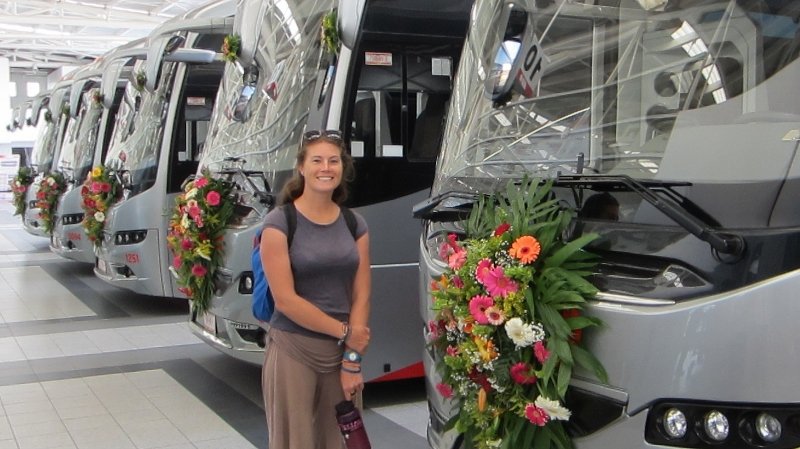 Who knew that Mexico City would be the hippest place we’d visit on our entire trip. The city was alive with people, art and culture and if there wasn’t a need for truckloads of armed police, it could possibly give NYC a run for its money. We stayed in the Zocalo district, and enjoyed its many plazas, cathedrals, and stunning buildings that give you the sense of being in Europe, but at much cheaper prices and with way different culinary flavors. For example, one of their specialty drinks is a spicy Michelada (Beer and Clamato) which robin demonstrates how to drink in this short video:

It appears as though Mexico City has made some huge progress in terms of air quality as we enjoyed beautiful blue skies each day filled with white fluffy clouds. On Sunday, the city shuts down 8 lanes of traffic around Alameda Central and Paseo de la Reforma for runners and cyclists, and we were excited to find ourselves out amongst the locals, enjoying a nice run through parks and major streets. Mexico City is famous for having more museums than any other cities including lots of Frida and Diego info. Luckily we ventured out to a couple fo them before getting hit with our last round of stomach issues. Here we are at the Museum of Anthropology, home of the Aztec calendar. 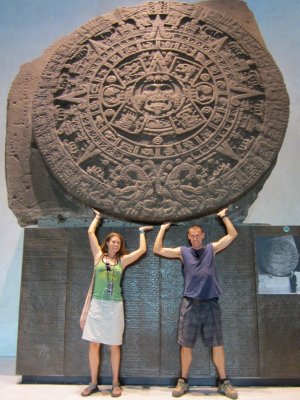 The culinary reputation Oaxaca has acquired is well deserved. Every day we feasted on some new and delicious grub, and what made it so fun was that each ‘restaurant’ was basically someone’s house that opened up to sell food. So, it was as if we were going from neighbor to neighbor for a home cooked meal! At the Sunday market in Tiacolula we gave cooking a shot ourselves at one of the many ‘grill it yourself’ stands. 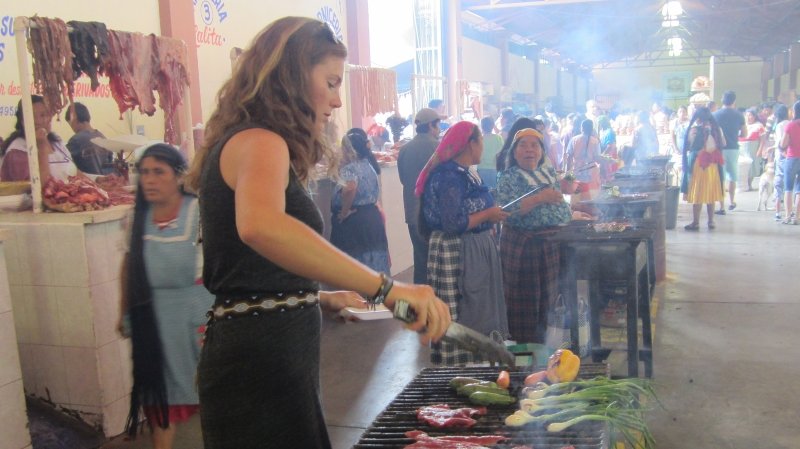 The amount of chocolate in this city was unbelievable. There were chocolaterias on every corner and sometimes the same brand would have stores across the street from each other like Starbucks in Seattle. The best part about these shops was the endless amount of samples

Each shop had its own variety of mole sauce, chocolate bars, and roasted beans. Locals would come in and buy beans by the kilo and the shop would grind it all up with almonds and cinnamon. 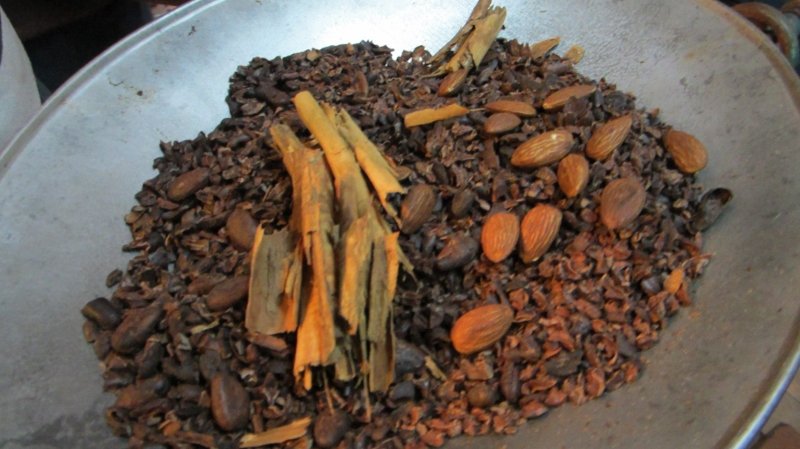 Another big culinary treat in Oaxaca is the Mezcal and Pulque culture. There are loads of farms in the hills around the city that you can pay visit to and learn about the agave distilling process, and there are even more Mezcalrias in and around the city streets for sampling! So far we have had the most amazing tequila in Mexico, but as for Mezcal, we haven’t yet developed a taste for it. 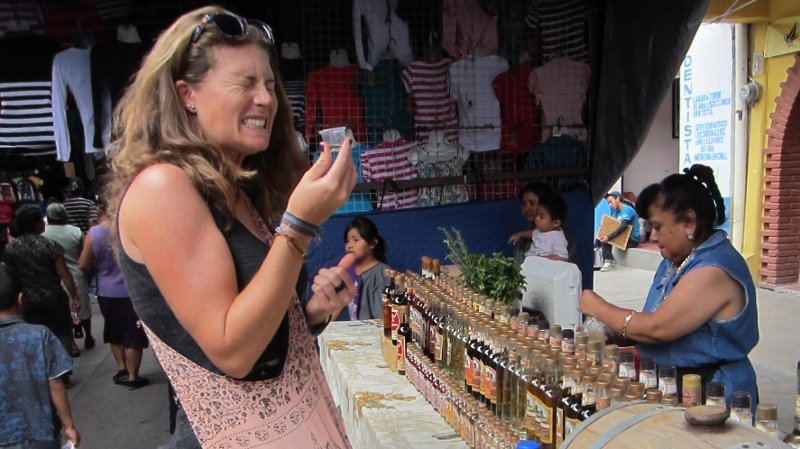 The mountains of the EZLN

We were super excited about escaping the sweltering weather that we had been in for the past several months, so when we reached San Cristobal we couldn’t get enough of the cool mountain air. The smell of pine needles in the city was something unexplainable. Even more so was the church in San Juan Chamula, which has its floor carpeted with pine needles. We watched as the villagers would come inside to perform healing ceremonies involving countless candles and chicken sacrifices. 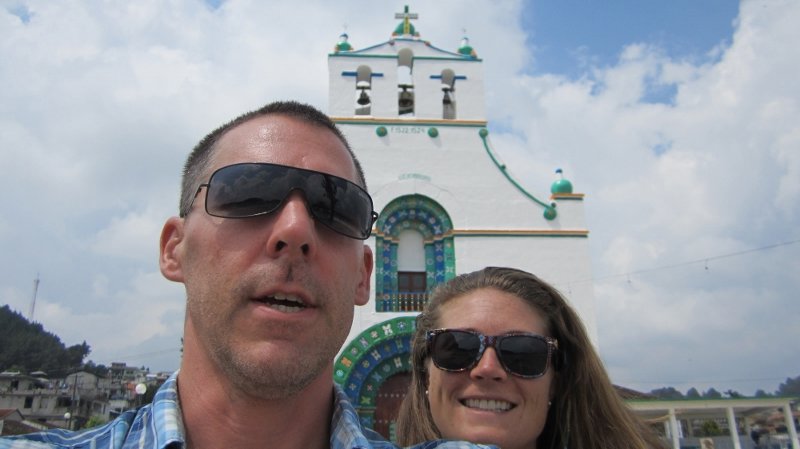 We took our time venturing around the city and also started heavy production on our “full-feature adventure film” (premiering in June 2013). The old colonial town is filled with beautiful churches and delicious food. Although it seems like we have now eaten about a million corn tortillas, we still love them fresh off the grill!! 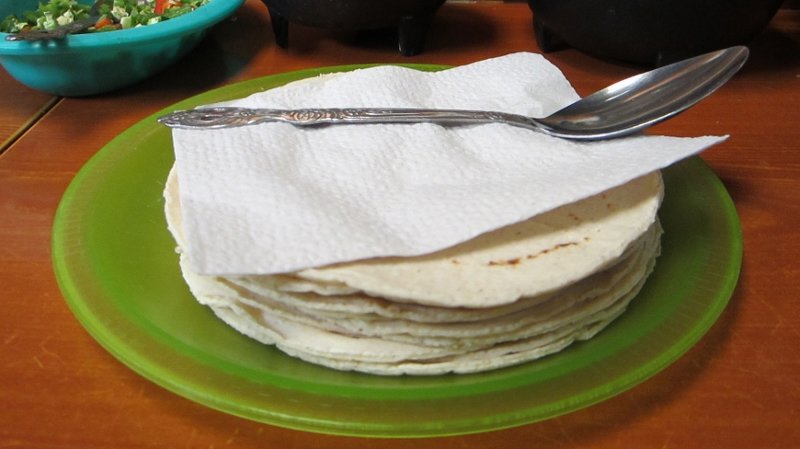 However what we really, really enjoyed was the Pozole soup with big thick maize kernels and super smooth tequila!

Lucky for us, Robin has a nose for sweets and discovered our new favorite treat from the local lacteria – ice creams in little bags made with real cream and for only 2 pesos (16 cents). 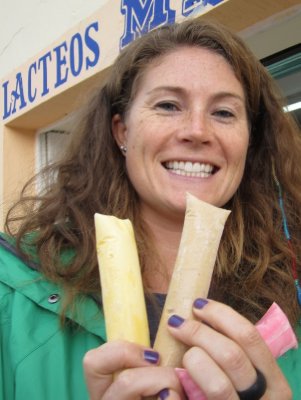 We were immediately in heaven with the food in Mexico and were eating all of our favorites and lots of things that we had never heard of. Including lots of chilies and hot pepper sauces! 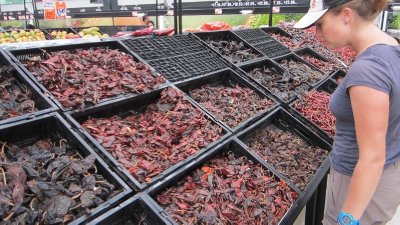 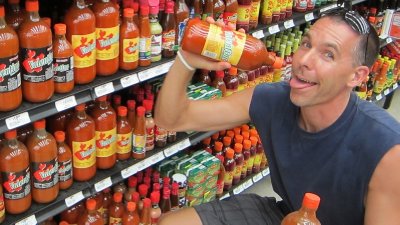 The ruins of Palenque were managed a lot differently in Mexico than in the other Central American sites. The biggest two differences we noticed was the excessive number of guards and the full access to the site that vendors had… making it much more pleasant in the morning before they all arrived. But nothing could take away the extreme beauty that the massive jungle that surrounds the ruins provided. We found a good spot to get creative with pics and decided that planking Palenque was in order. 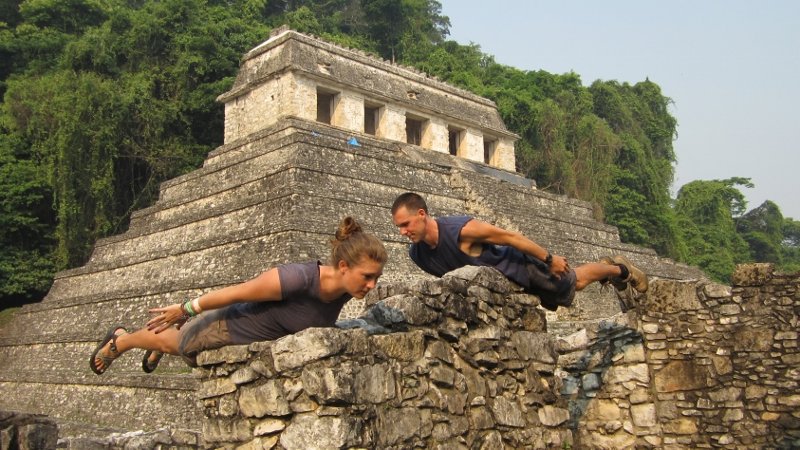 One of the most interesting parts of the Mayan civilization was their written language. Archeologists claim to have deciphered their little cartoon images, but it seems hard to imagine that we can really understand why and how these people thought so long ago. 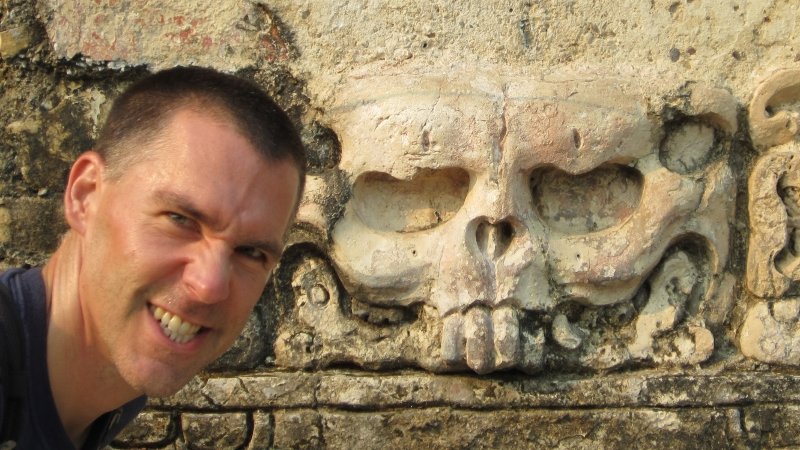