It doesn’t rain in Seville?

It is said that Seville is the driest, hottest place in Europe. It claims to have the highest recorded temperature in the world – 56 degress C (40C = 104F)! However, somehow, we managed to stay for three rainy days in Seville and put our Vietnam Northface knockoffs to good use! This was coincidentally the same time Sandy was pounding on the East Coast, perhaps climate change should not be dismissed…. 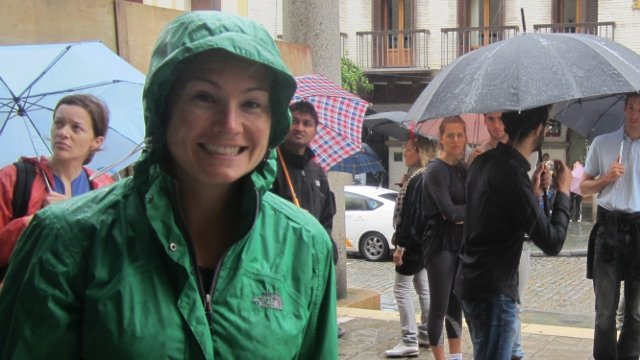 Seville has an amazing network of narrow streets built by the Moorish that make it super easy to get lost, and very amusing to watch all the tourists with their maps trying to figure out where the hell they are. On our walking tour with Medi, we learned that Seville has decided to give each street at least two names, and in one case we found a street with 5 names that was only 25 meters long, so you can only imagine the confusion this creates on the tourists, and even the locals! 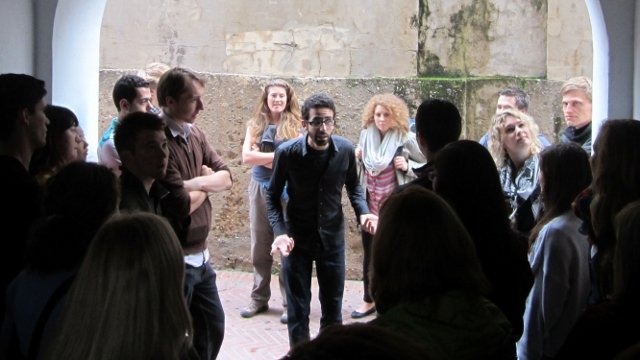 Do the words ‘Seville oranges’ ring a bell? These orange trees are literally are all over the city. Sadly, the oranges are very sour and terrible to eat, but they are perfect for drinking in Beefeater Gin… Check the back of the bottle next time you have a G&T and you will see that the recipe includes oranges from Seville! 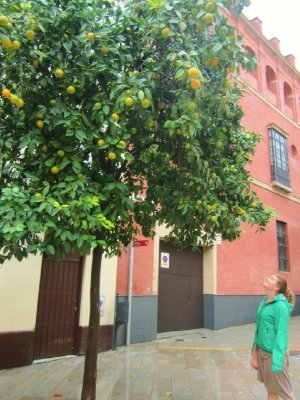 Seeing how loads of famous bullfighters are from here, we were least impressed with the bullfighting ring, yet most impressed by the Plaza de Espana because it displays so much history in the architecture including flags for each province and a small map. It’s really large with a uniqueness to it that you might have seen before since it was used for hit films like Star Wars. 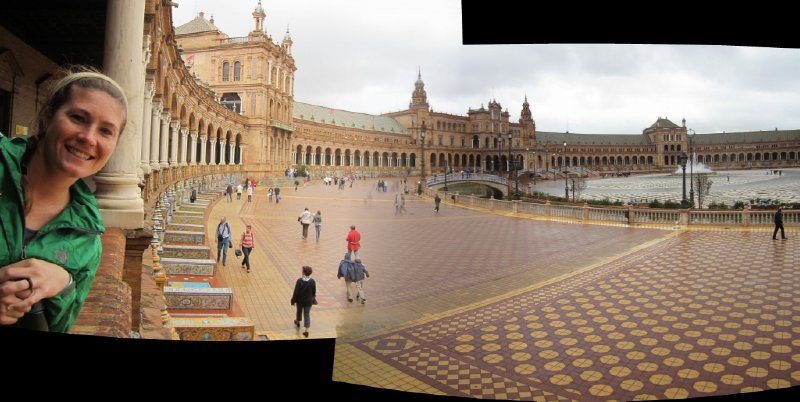 Do these people ever go to sleep?

Madrid is all about staying up late with music shows not even starting till 11pm on a weeknight! It’s also a city of art and has three of the most famous art museums in Europe – Sofia, Prado, and Thyssen. We aren’t big on spending all of our time in the museums, so we jammed through a few of them in the evenings when they open up for two hours of free admission

We liked how the Reina Sofia was an old hospital converted to a museum and the uniqueness of Gayo’s black paintings. The Prado is an enormous museum and we dug the spectacular rooms and hallways. 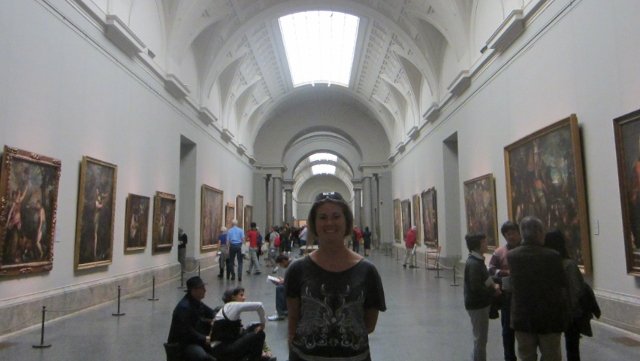 We learned about free walking tours from our hosts Jose and Sole. This was our first organized walking tour on our entire trip and we would definitely recommend them. We learned a great deal about the city and its Moorish history, but most importantly we learned about the Monasterio del Corpus Christi where we could buy dulces (sweets) from a small little revolving window from the nuns inside a convent, and also a placed called San Ginés where we could sit down for some fresh churros con chocolate! which should actually be called chocolate con churros because you of the huge amount of dipping chocolate we were served! 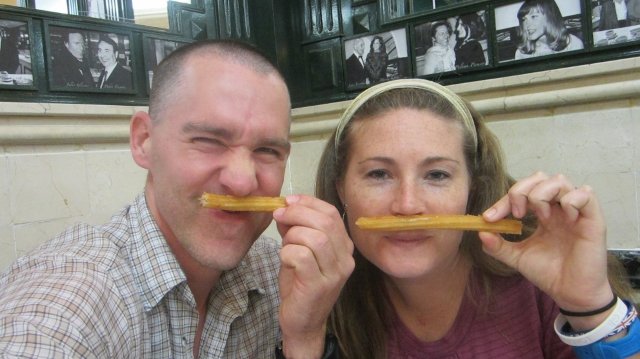 Madrid has a rich history in bull fighting but there is beginning to be resistance against killing for fun, so we decided to visit the bull fighting museum instead. It had a great deal of paintings and sculptors of famous bull fighters but not much in the way of explaining how bull fighting is more like a dance than a fight. 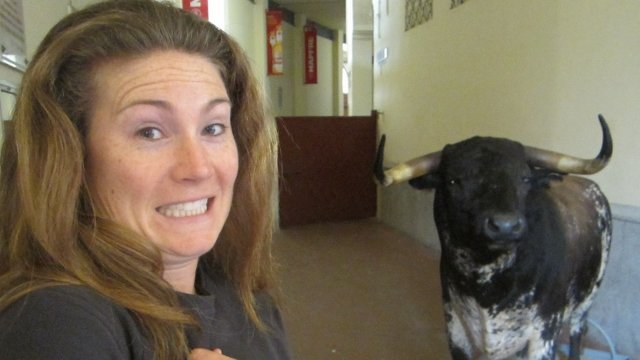 In search of the best free tapas we found a few dive bars that served us up full plates of food. Most people order “cañas” (very small beers) but after we ordered “cervesas mas grandes” we were rewarded with full plates of tapas! Our favorite was a place called El Tigre. Being the end of October we picked up a soon to be jack-o-lantern for our hosts and took him out for tapas before bringing him home… Happy Halloween! 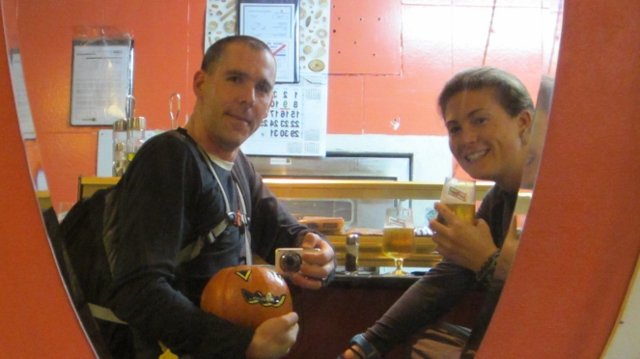 During our travels, we usually offer to make dinner for our couch surfing hosts – which of course leads to the question – what is a typical American dinner? Being from California, we generally feel like a Mexican dinner accurately portrays Californian cuisine, especially if we can call it “Meixcan Monday” or “Taco Tuesday” or “Fajita Friday.” However, we wanted to try something different, so after some time on the internet, we decided upon a truly American meal:

This was Robin’s first ever attempt at making Macaroni and Cheese. Luckily, allrecipes.com did not disappoint and we made a delicious and cheesy meal with the addition of some Oscar Meyer hot dogs in just for kicks! Kevin used skills he learned from his mom and made a monstrous apple pie. 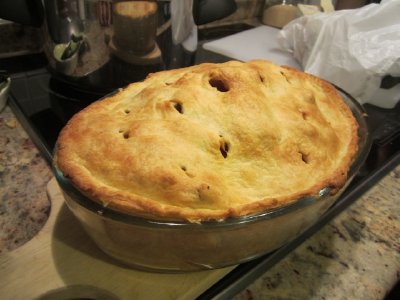 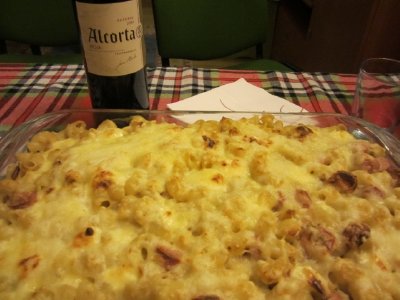 As with many towns in Spain, Valencia is known for its paella and its healthy servings of seafood. Now that shrimp paella has become the standard to serve to tourists there has become a huge selection of shrimp sold in the markets, and there are even frozen food stores that specialize in rows of different varieties of shrimp! 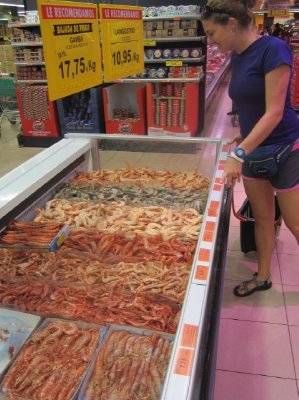 In 1957 Valencia was flooded by the Trio River, so the city decided to divert the river to avoid future flooding. This left a more than 10 km long stretch of open space that was converted into a park (El Jardín del Turia) that when followed dumps you out onto the beach! It’s pretty awesome because the old bridges keep the traffic above you so you can run or bike without interruption of street crossing.

Horchaterias were abundant throughout the city but we found something even more refreshing… hallowed out oranges and lemons that are filled with ice cream! 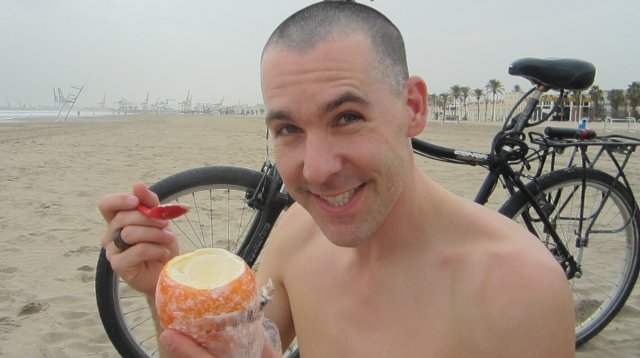 We were trying to decipher the difference between siesta time and basic issues that Spain is having with their economy. It didn’t matter what time we were out and about, but at least half of the shops were always closed and some shops in our neighborhood weren’t ever open for the entire time we were there. Tapas could be found, but we weren’t always certain if places that were open the previous day would be open or not. 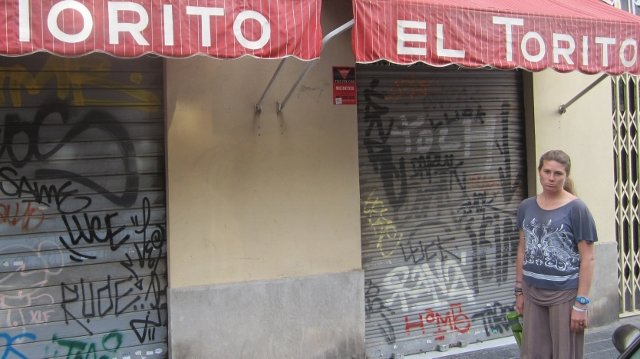 Barcelona is a very pretty city, and although crowded in some places, it was easy to get off the beaten path and find a narrow alley way to walk down. For example, in one quiet ally we stumbled into the Temple D’August Roman ruins, and then found the newest craze in candy called Happy Pills! 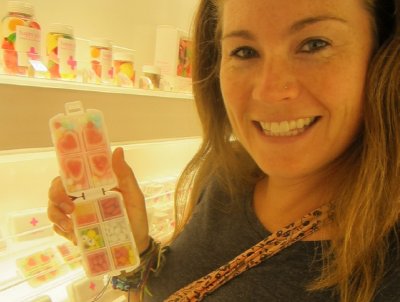 We also braved the crowds including the ones at the Sagrada Família, where inside the cathedral really did feel like a forest with tree trunk columns branching out into more and more branches that hold up the ceiling. We were glad to have an audio guide because there is so much detail put into the cathedral that it would have been impossible to notice everything on our own. Here is Kevin hugging a ‘Gaudi tree.’ 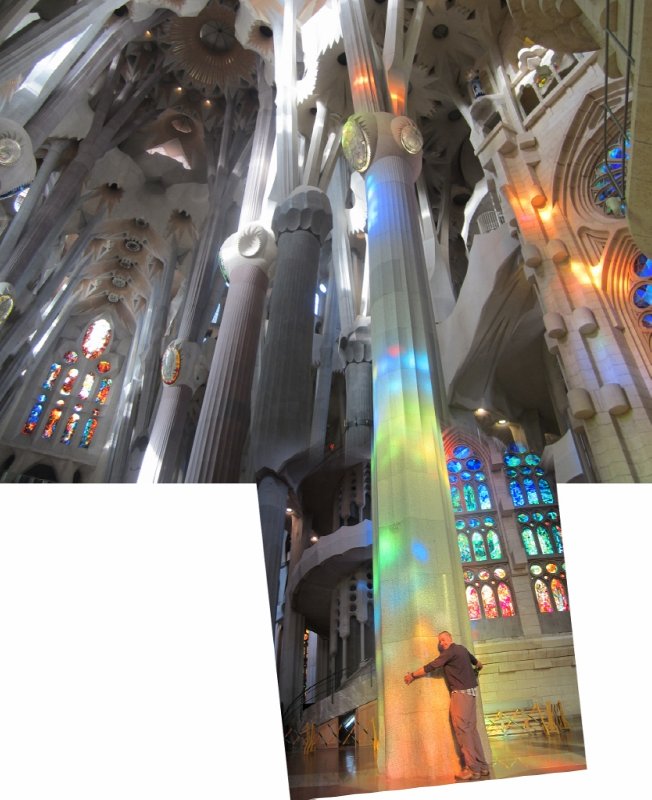 We were shocked by how many pig legs were on display in the markets and ordinary grocery stores. Back in the day, eating pork was used as a way of finding out which religion you were (or were not). These cured meats had a special funk to them and we found out the hard way that they are covered in some kind of goopy creamy stuff… eww! 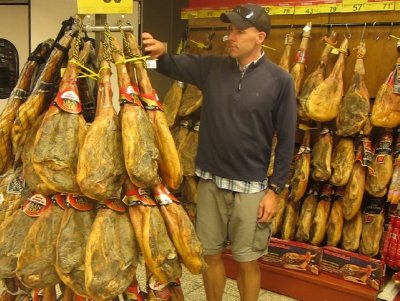 We enjoyed our stay with Rob in his apartment overlooking the east of the city facing Parc Guel, well known for the Gaudi lizard and its spectacular views of the rest of the city. 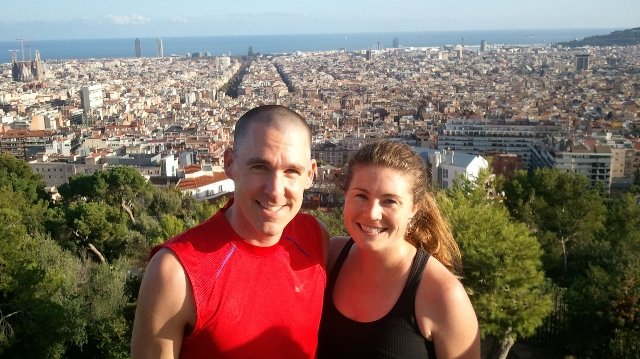