Excuse me miss, did you see the sign? No eating on train.

After our 5hr redeye from Perth to Singapore we were due for a healthy nap. Now, the Singapore airport is about the best place to spend some time in; they have everything from a swimming pool, spa, restaurants, exquisite shopping and most important to us – lounge chairs for napping! After resting, we headed into the city for some grub. There are cheap good food stalls everywhere with tons of different ethnic choices. As we explored the city we found ourselves continuously nibbling… sharing a dish from one stall (say, Peranakan Latska), and then trying another a few minutes later (say, Singaporean fried carrot cake [chai tow kway] – which turns out to be glutinous rice flour with radish and doesn’t actually contain any carrot). We loved everything we tried until we discovered durians! Apparently there is a love hate relationship with this fruit and although it can be found in many foods (including ice cream), it is currently banned from public places because of its awful smell. Here is a pic of a sign as you enter the subway (robin in the background): 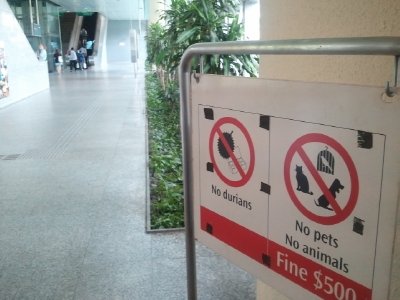 We had just three days in Singapore, but we managed to cover quite a bit of territory using public transportation and our running shoes. We had two lovely runs, this first was through the MacRitchie Reservoir Park and over a swing bridge they call the “tree top walk.” 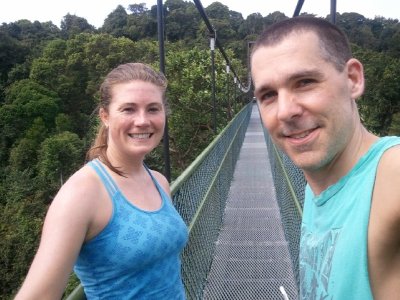 The other run was through the Singapore Botanic Gardens that contains the most amazing Orchid Garden (including an air conditioned cold room and a flower arch feature called “Golden Shower Arches”). This was our first encounter with heat + humidity and we decided that we could see more and be more comfortable running in running clothes rather than be slow and miserable in our tourist clothes. 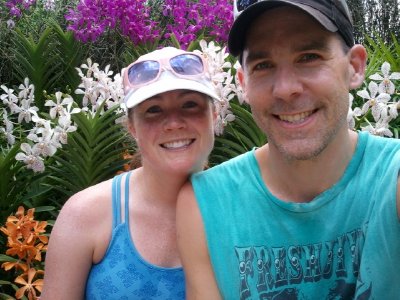 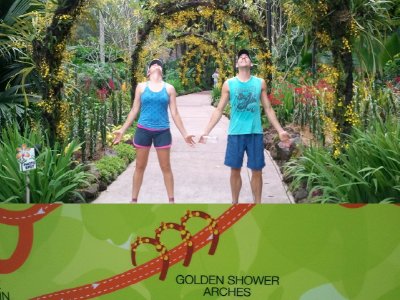 We sometimes notice the same people in different cities or tourist sites, however in Singapore we ran into two tourists in two very odd places, both a little off the beaten path. First, we ran past Emily and Stephan in an empty reservoir park that was an hour bus ride outside of the CBD (central business district). Then we crossed paths with them again in a crowded remote locals only food court in Chinatown. We ended up spending the evening drinking beers and watching a light show from the new Marina Sands Hotel with our new friends, who we hope to meet up with again in either their home in Germany or their family olive grove in Greece.

On our final night in Singapore, we went on the Singapore Zoo Night Safari, which far exceeded our expectations. It was a well-organized event with walking paths directly through the middle of animal habitats that contained illuminated signs with multi language verbal explanations and animal sounds like you’d see in a museum. There was also a small 45min wheeled train ride that went directly through the bigger habitats getting us very close to the animals and staying true to safari name. We were able to see so many animals that we had never heard of, watch a fire breathing show and get up close and personal with fruit bats in a low flying aviary. 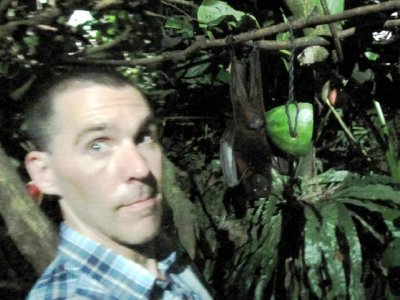