We thought it would be fitting to celebrate the end of our 5 months in Asia by living it up with some high class luxuries: sheets, water pressure, toilet paper, etc

We had two free nights via hotels dot com, and treated ourselves to a 4-star hotel in Dubai. Our plane landed late in the evening so instead of wasting one of our free nights, we slept in the airport lounge using our newly acquired Asian skillset to squeeze in-between the armrests. 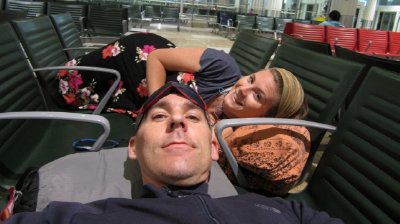 After a night in the lounge we definitely appreciated our 4-star bed! The hotel greeted us with complementary drinks and let us check into our room at 9am. We freshened up with a shower and then headed out to see the Gold and Spice Souks (markets). The Gold Souk turned out to be most impressive with the incredible amounts of shops and jewelry displays. Talking with the shop owners we learned about the differences between white-gold and gold-gold. 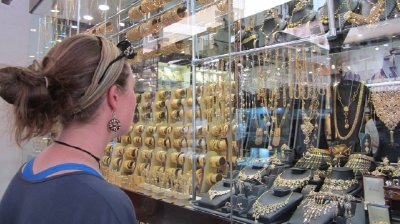 With full intentions of relaxing for a few days we took advantage of our luxurious hotel amenities by hitting the gym, dipping back and forth between the rooftop pool and the steam room, washed all of our clothes, watched a movie on our huge flat screen TV in our plush puffy pillow rich bed, and most importantly we enjoyed our complimentary breakfast buffet by sampling a spread of several different non-Asian cuisines (including Mediterranean, Arabic and American). We spent about an hour each morning sipping coffee and reading the newspaper… can you picture us sitting down for that long? 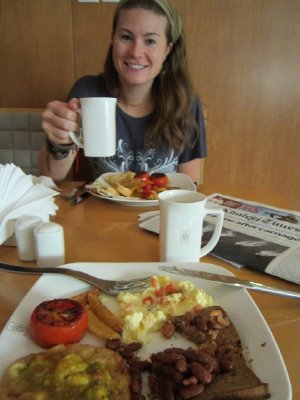 The metro is elevated through most of the downtown area, and as we gazed out at the city, we saw many incredible buildings of all shapes and sizes. This place is a structural engineer’s paradise! We felt like little kids at an aquarium as we pointed and squealed with delight at each building as if an exciting new fish would swim by the window. We also took a private monorail out to Atlantis Resort, and suddenly found ourselves in what felt like Las Vegas. We wondered around for a little, and quickly realized that we could either spend all our money in about two days here, or travel for another 6 months – we chose the latter and headed back over Palm Island (the world’s largest manmade island) to explore more of the city. 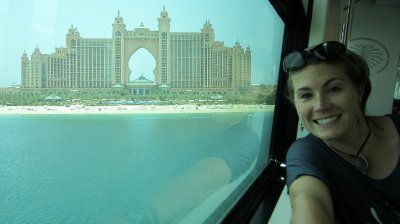 Palm Island was only one of the many ‘world records’ that we saw in Dubai. It seemed like everywhere we went there was a Guinness World Record plaque hanging on the wall! For example, while we were in the largest mall in the world (Dubai Mall) we walked past the world’s largest Acrylic Panel (for the aquarium) on the way to see the tallest building in the world (Burj Khalifa) and the largest fountain show in the world boasting 25% larger volume than the Las Vegas Bellagio fountain. 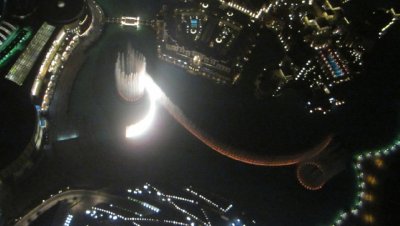 It was hard to comprehend the scale of the Burj Khalifa because it’s in the middle of the desert, but luckily the queue to get on the viewing platform was lined with loads of fun facts and information about the tower. One of the exhibits allowed you to see what famous city skylines would look like If the Burj Khalifa tower was built there. Here is what the San Francisco skyline would look like: 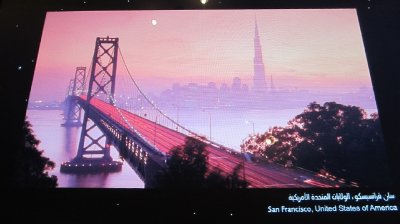 Inside the mall, there is an aquarium, a full size ice rink, a cinema, over 12,000 stores and most importantly there are lots of big screens reminding everyone about important cultural laws such as “No kissing or overt display of affection!” Kevin would have loved to have been on the design team for that icon! 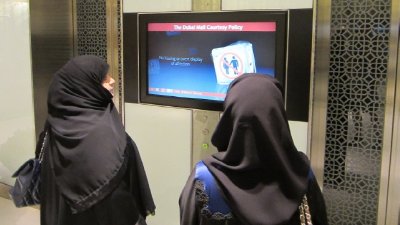 Exploring Dubai was a drastic change after being in Asia for so long and immediately after being in India for 3.5 weeks. We had the strangest reactions to simple things like sidewalks, crosswalk and different foods. One of which is now our favorite new food (and word)… “shwarma” and they are basically what we know as a ‘gyro’ but the street venders told us that they have waaaay better sauce

Lucky for us we had a few vendors around the corner from our hotel! These guys were super friendly, and their two flavors of shwarma (spicy or non-spicy) were a pleasant addition to the ‘out of Asia celebration!’ 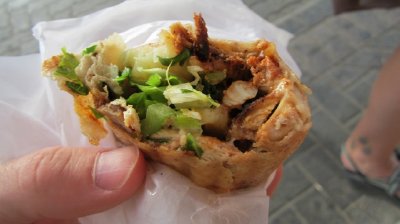