Packed up and at the Airport

After another full week of organizing banks, and banker boxes we are at the airport and are so ready for the beach! We'd hate to have to give an honest number for how many times we packed everything up just to remember we forgot to put something in or needed something out of the box buried on the bottom of the stack. All together we managed to shrink our worldly physical possessions into a small corner of our parent’s basement. 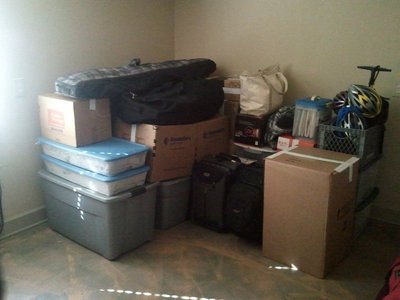 With all this talk about storing and shuffling 'stuff' around, the big question is, what are we actually taking with us?!
Below is a picture of the contents of Kevin's bag spread out on a table, and the itemized list. 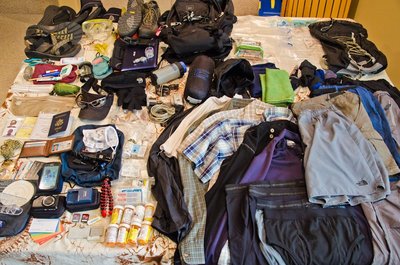 Now you might ask yourself, if all of that is in Kevin's bag, what in the world can Robin be carrying?

with seattle in our rear view, we made it to fort collins! three days of driving, and two night in hotel penske. 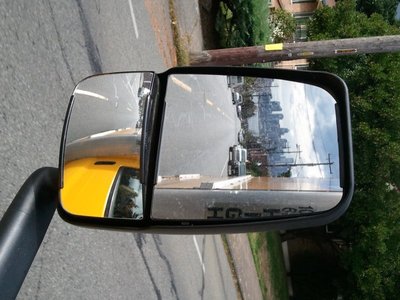 with about 20 boxes of our worldly possessions and 5 bikes, we have filled up kevin's parents basement and are finalizing the details on the trip. For every one thing we cross off the todo list, we add three more. t-minus 2 days till we leave the states on thursday! 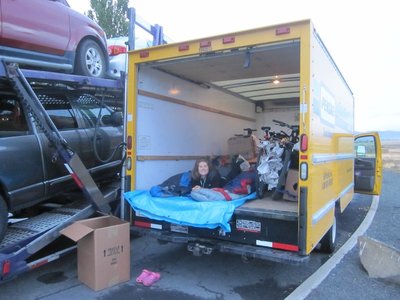 Thanks for all the hugs and well wishes at the farewell party! On a classic seattle afternoon we had a few rain drops, before it cleared for a gleam of sun above the olympic mnts. 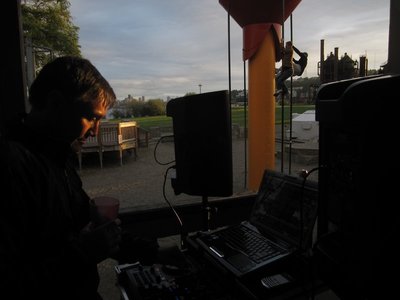 We home brewed 5 gallons of Raspberry Ruby Ale and 5 gallons of Coffee Stout served out of the garbage can below... which by the way was the primary fermenter for both beers and is a Strharsky heirloom handed down from Kevin's dad's brewing days. 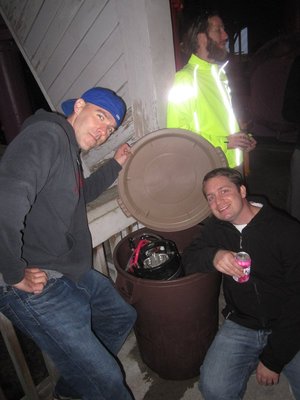 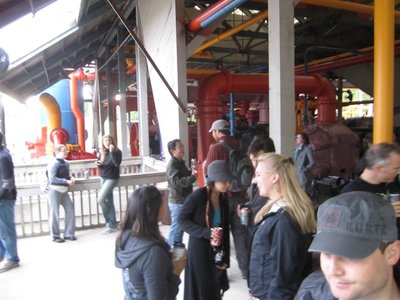 In case the opportunity arises to rent motorcycles, we decided that we should learn to ride them and to be safe. In the state of Washington, the motorcycle safety course is subsidized, and for just $100, you can take a 3 day course on how to ride and be safe on a motorcycle. This experience turned out to be very different for Robin and Kevin. Robin thought that riding a bike with a motor couldn't be that much harder than riding a bicycle and perhaps the class was a little overkill. Kevin thought that riding a motorbike would be very challenging.... both of us were wrong! Robin nearly dropped the bike the first time she sat down, and Kevin found that riding the bike was really not that hard.
Over the course of three days, we both managed to hone in our motorcycling skills and passed with 99 and 100 percent on the driving evaluation, and we both got 100s on our written tests. Robin was amazed at how challenging it was to maneuver a 300 pound bike, especially at slow speeds. Hence, everything is easier with more speed. In fact, motorcycling is very much like mountain biking... don't look where you don't want to go, and momentum and speed are your best friend.

Our instructor at the Evergreen Safety Council (Jim Sullivan) was one of the best. He really made the class fun, and informative. Two funny quotes during the same class came out of stories about being safe on the bike, really!

1. Jim teaching us about 'get your head in the ride or put the bike aside' told us a story about how his dog was giving birth to puppies all night long so he was too tired to ride in the rain the next day: "So my bitch was popping one out ever hour"
2. After talking about riding over train tracks at a right angle, robin gave the example of how hard it is to do that in Westlake where the South Lake Union Trolley Runs parallel to cars (and bikes): "I was being chased by a S.L.U.T. the other day"

All in all the class was well worth the money and we both are now legal to drive motorcycles in the State of Washington, which scares us a little too cause neither of us are prepared to ride on a busy street, much less the highway. But if the chance arises on a farm say in New Zealand, I think we will both jump on the opportunity. 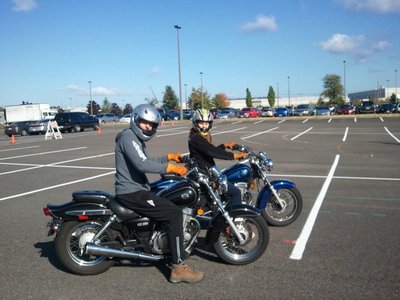 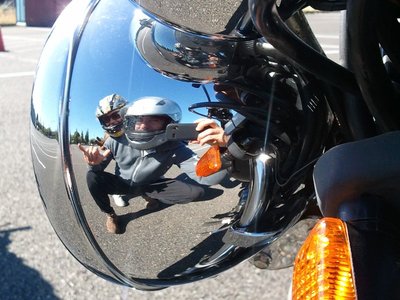 getting rid of everything!

Right now there are two pieces of furniture left in our house... the desk that I am typing on and the chair that I am sitting on. Last night we ate dinner sitting on the floor using a cutting board as our table. It is amazing how much stuff two people can accumulate, we blame the basement. New rule of life = move every 3-5 years no matter what so that you can cleanse of stuff! Attached is a picture of Robin counting up the CL $ before one of several trips to the bank. 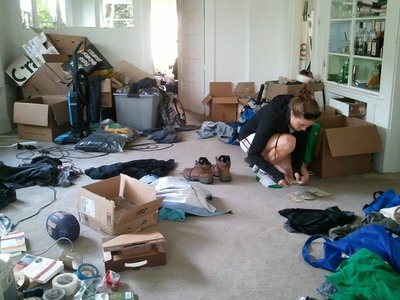 what we have learned, laughed, and been frustrated by...

Basically, we are selling everything. Our hope is to move with just the bare essentials. Which may be slightly more for Robin than for Kevin. Rather than having a garage sale, we decided to sell stuff on Craigslist. So far, it has been very successful, with the occasional dumbass responses, which always provids us with some laughs. Here are just a few:

And my absolute favorite was the girl who showed up to get a large 5 drawer dresser with broken arm and cracked rib!!!

Apparently, some items are really sought after, such as Kevin's brewing supplies, coming in at $400!!! He has gotten over 12 emails in the past day from people. Then there is selling items of no value for free. It is amazing how quickly these items went for free:

Then there are the random items that shock me when people are actually interested in buying:

There are several tricks to using Craigslist. First, always renew your posts! This means that when people search, your stuff is on top. Second, include pictures, if you don't people will email for them and then you have to send them anyways. Third, never tell someone something is sold until the item has been picked up. There are so many flaky people that you don't want to tell a buyer that the item has sold, until you really have sold it. Finally, if people can't use Google Maps to find your house, DO NOT sell them anything! Otherwise, you will spend over 20 minutes on the phone with people who are lost, that will then show up late. So annoying!

Yep, the packing has begun. Mainly because we are not sure if we are driving our stuff or taking a truck. We are trying to downsize and sell almost everything, but there are keepsakes that we cannot part with. Today I packed up my work clothes, heavy winter clothes, and some dresses. 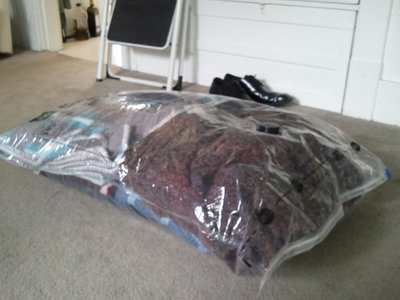 5 Large Blankets Prior to Vacuum Seal 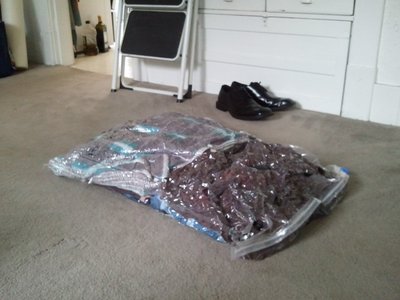 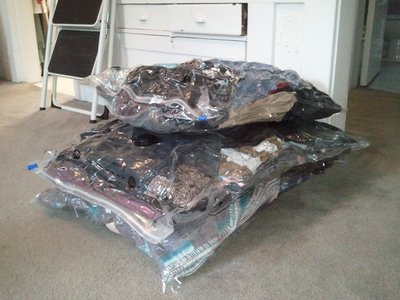 It is amazing how much you can get into a small space with these vacuum bags. We plan to travel with similar bags that are vacuum sealed, with no vacuum required.

just one month away from our around the world travel.

For those of you who do not know, Kevin and I are now engaged and are taking a year off to test our relationship by travelling around the world. We are wearing our wooden rings and as we learn and change with our adventure we will expect to see how our porous rings weather the elements of life, after all kevin's middle name is adapt

On October 13, 2011 we will be departing the US for approximately a year, following the itinerary on the map above. After Thailand, we are going to "wing it." We hope to hit parts of Southeast Asia, Africa, Europe, South America, and Central America. Along the way we have some exciting adventures including working on a sheep farm in NZ, spending Christmas on the beaches of Perth, meeting up with Uncle Charles in Malaysia, attending a wedding in Serbia, watching the 2012 summer Olympics, spending some time with our family in Slovakia and England, and much much more! We welcome suggestions to places to visit.