In Split, we stayed in a two-bedroom apartment very close to several beaches in the heart of Split. The owner of the apartment gave us some great food and restaurant recommendations, so we set out to try some Croatian food, see the walled city, and relax at the beaches. The beach was a close walk from our apartment, and it was packed with people. Our host supplied foldable cushioned mats and we soon realized why; everyone lying out in the sun was lying on what looked like a concrete sidewalk. Most of the beaches we went to were constructed from either large rocks or concrete, however that didn’t stop us from enjoying the water, jumping off things and laying out in the sun. It’s amazing how much fun people had just being in the water. The most common game the locals played was hitting the ball back and forth with the palm of your hand (in Greece they used a wooden paddle).

We sampled lots of different Croatian (and Bosnian) food while in Split. We tried what is called “cevape” (ground beef, hand rolled into sausage-like shapes that were then grilled, put into a bun, and served with some cheesy sauce and onions), as well as the local oysters and other seafood creations. 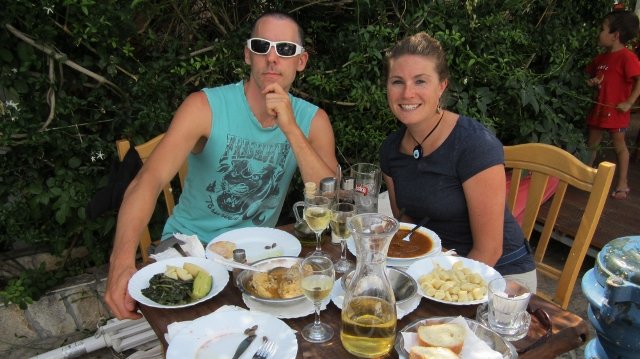 Unfortunately, the weather turned on us so we headed to a mall in search of a suit for Kevin to wear at the upcoming wedding in Serbia. Turns out that malls in Croatia are very similar to the US. However, Split did have something much different than we usually see in the states… an old walled city and Palace with narrow streets only for pedestrians. We hiked to the top of the bell tower, which had some amazing views of the city. 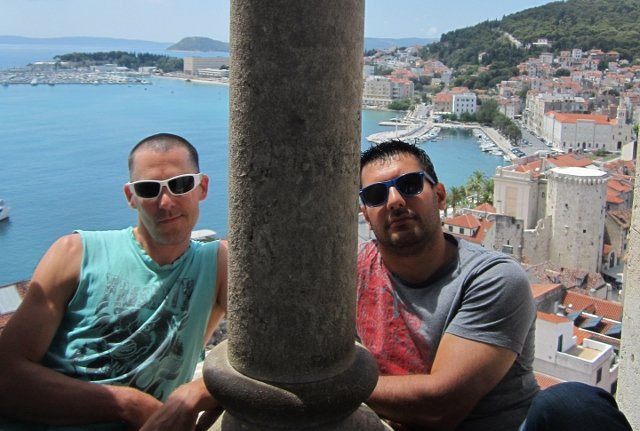 Also foreign to us, drinking in public is also common place, so we grabbed some roadies and headed down to the waterfront. We joined in with what seemed like the entire town out on the bluff with the same idea. After chatting with some of the locals we learned about the clubbing culture and headed along the beach to try out the waterfront clubs. 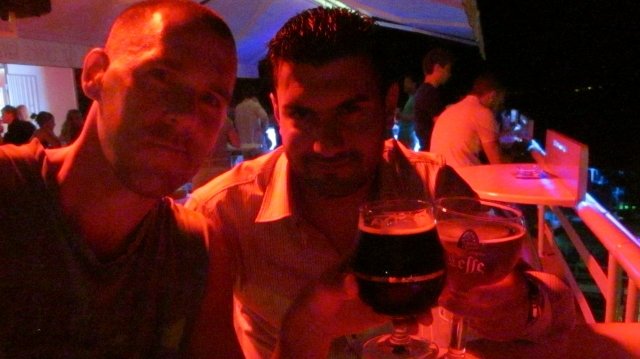 A city and its walls

When we arrived in Dubrovinik, we were shocked at how many tourists flooded the streets. Walking in the shade was quite the challenge as masses of people walking both directions were all trying to squeeze in to avoid the heat. We arrived in our studio apartment and eagerly awaited the arrival of Kevin’s college buddy who would be traveling with us through Croatia, Montenegro, Bosnia and Serbia. The Vermz arrived a few hours later pulling the world’s largest suitcase through the cobbled streets! We celebrated his arrival by bringing a few of the local 2L beverages up to the overlooking hill for sunset.

We were very entertained by a legendary small stone protruding from one of the walls in the main square. There are endless tourists giving it a try, including us. The object of the game was to stand on the rock against the wall and balance well enough to take off your shirt. This was WAY more challenging than it looks, and is possibly just a way to get tourist to take their shirt off! 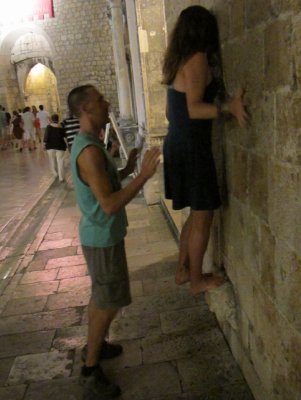 Dubrovnik is more charming in the morning, or late in the evening when the cruise ship passengers have left. In the warm evenings, the narrow city streets pack with café and bar goers. 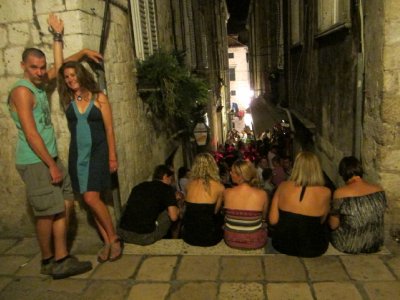 Although the streets inside the city can be very crowded, the walls of the city were not. We walked around the city along the top of the walls for some unorthodox views of the city from above. 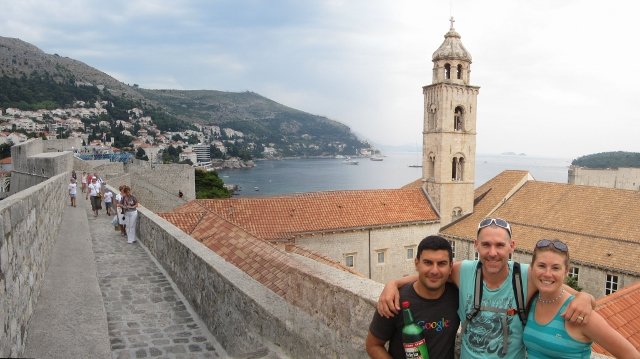 While walking along the wall, we noticed some cliff jumpers, so we headed through a small opening in the back side of the city walls which turned out to be a beer bar with several different places to cliff jump. 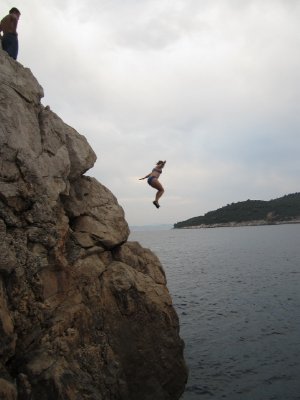 The water here was beautiful, but the beaches lack fine grained sand, and instead, consist of either big rocks or cement blocks. Our little studio was just 200 meters from the beach, so we took full advantage of morning and evening swims. We were happy to have found so many activities in such a small city. 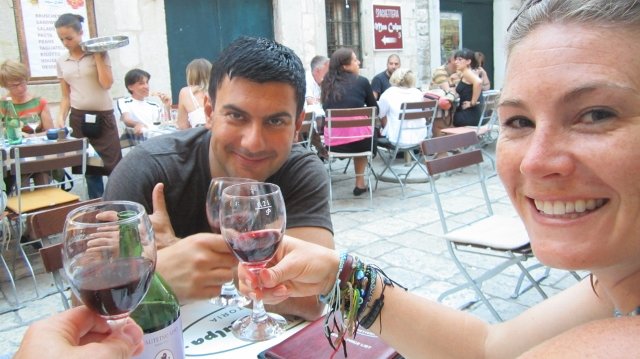