Although the banks of the Mekong are about 30ft lower because we are in the dry season, this mighty river still flows strong. It creates part of the border between Laos and Thailand and is an excellent alternative to a bumpy bus road. We floated smoothly down the Mekong River from Chiang Khong Thailand into Luang Prabang Laos on what is commonly known as the “slow boat.” The trip takes two days with a stopover in Pakbeng for the night and has become a popular party boat with the backpackers drinking Beer Lao hours before our 10:30am schedule departure. The trip is beautiful and filled with exceptional scenery. Most people just hung out on the bow or off the sides of the boat, played cards, read books, or joined the mini party in the back with rice whiskey and Beer Lao. 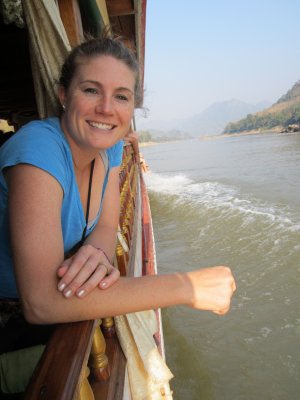 In Chiang Rai there are numerous tour agents that will sell you a tour package that includes minibus transport to the Lao border, a river crossing, and a ticket + transportation to the slow boat dock for a cost of $3,000 baht ($100 USD) for both of us. In true DYI spirit we decided that we would do better on our own; we took the local bus, a tuk-tuk, the river ferry, and walked the 200m to the slow boat dock. In total, we paid only $2,060 ($68 USD) and easily beat all the tour groups through immigration. This may not seem like that much of a savings, but in Southeast Asia a few dollars can pay for full days’ worth of meals (in this case we saved enough for 17 large bottles of Beer Lao). Before you take the slow boat, we’d recommend looking into an elephant festival (sometime in February each year) somewhere between Pakbeng and Luang Prabang. We met a couple who were dropped off in a remote village and it seemed like it would be a great adventure. 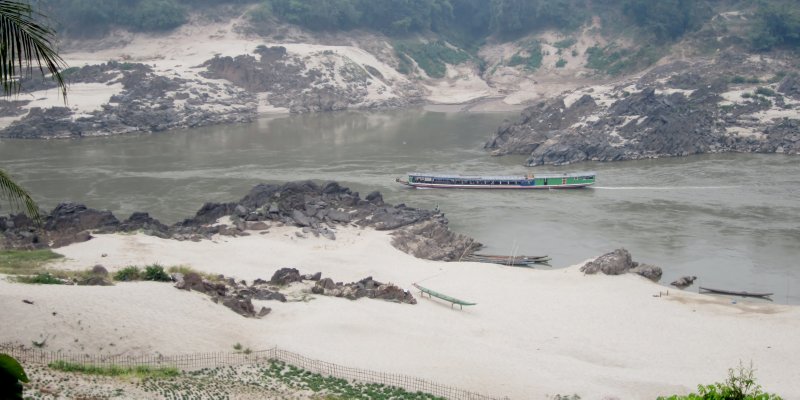 We boarded the boat about 9am for our 10:30 scheduled departure… there are numerous horror stories online about how they over sell the tickets and how some people end up without a seat and have to sit on the hard wooden floor in the boiling hot engine room. To set the record straight, all of these rumors are true! Securing some good seats towards the front of the boat was well worth getting up a bit early. 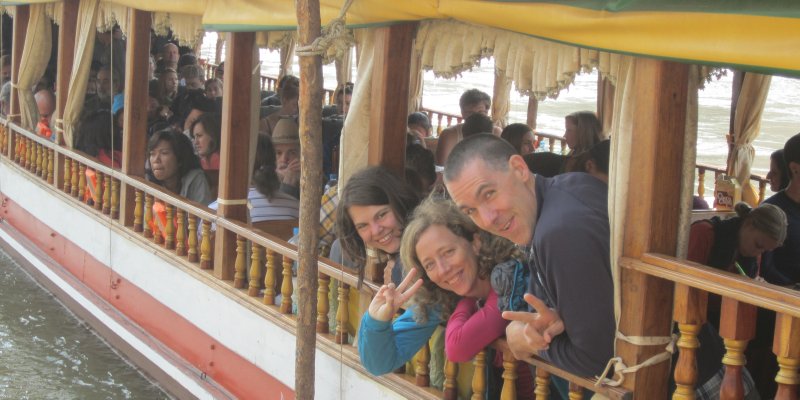 Once 10:30am rolled around, half the boat was still empty. After assessing the situation, we determined that because we are in the off season there was only one boat leaving today and sticking true to Asian standards, the transport wouldn’t leave until the aisles were completely packed with passengers. It turned out that all of the tour groups were up the riverbank having some breakfast (one point for the tour groups). We quickly meet some fellow travelers from Seattle, Florida, New York, England, and Canada and cracked open a few bottles of Beer Laos while we waited for our boat to fill up. 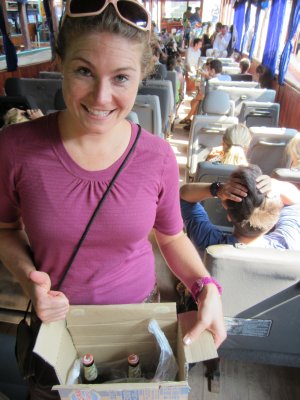 At noon the tour groups flooded onto the boat, so many people were boarding that we exceeded the seat capacity by at least 20 passengers! This didn’t seem to phase the boat operators; for the next half hour they grabbed chairs from other boats and started filling the isles with more seats, finally departing around 1pm. 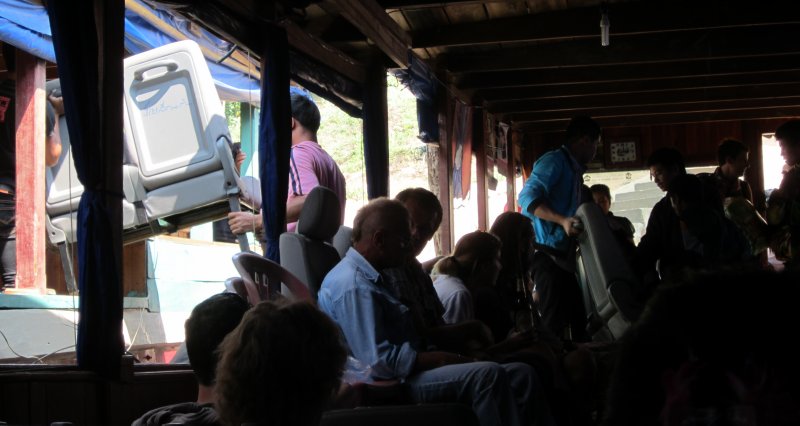 We arrived at Pakbeng at around 6pm, only to realize that we were at the front of the boat, and our backpacks were at the bottom of a huge pile at the very back of the boat. Imagine sitting in first class on an airplane yet storing your luggage behind row 46 and there’s only one exit at the front of the plane…. not easy. So began the awfully inefficient process of all 160 passengers trying to recover their luggage. After getting our bags we found a cute place to stay and dug into a well awaited meal.

We were told that the boat would leave at 9am the next day so not to be late. We showed up early again and scored a table and benches around it for us to play cards and work on the computer with our friends Elle (England) and Geneviève (Quebec). Note that on day one we were assigned seats, day 2 was a different boat without assigned seats. 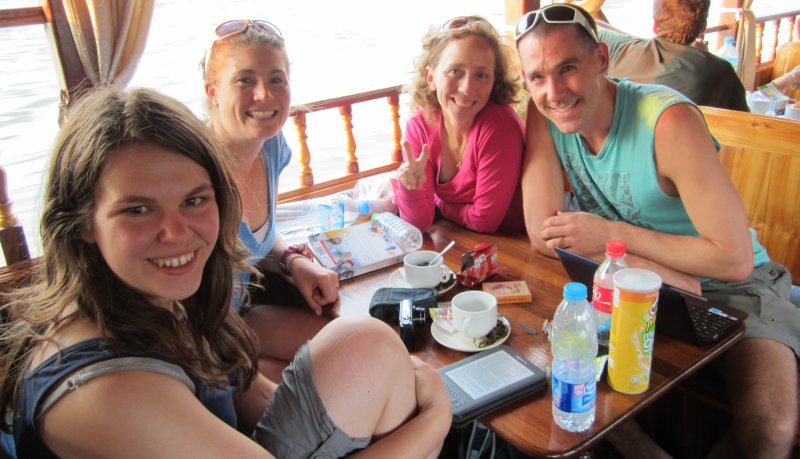 Then the waiting began! At 9:30am, the captain and crew were drinking Beer Laos, without a sign of a departure nearing and of course with the language barrier we had no idea what was going on. Finally, at 12:00, a minivan drove down to the dock, and the mystery was solved; an additional 10 passengers with huge suitcases boarded the already full boat. We pushed off by 12:30 and those poor people had to sit in the engine room as we were already over capacity, but we certainly didn’t feel bad about it since we had been waiting for them for over three hours! 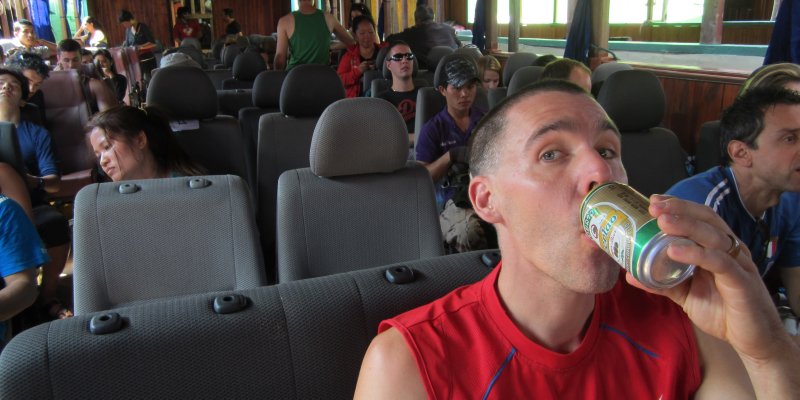 The second day on the river was even more beautiful than the first; we saw lots of cute villages, children playing in the water along the banks of the Mekong River, concluding the day with another beautiful sunset. All in all, we highly recommend this trip to anyone, just make sure to go with the flow and remember that you really don’t have any place to be. 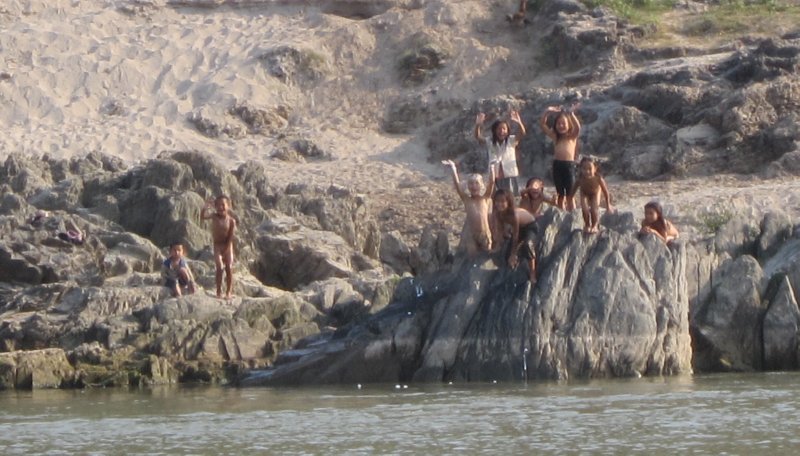 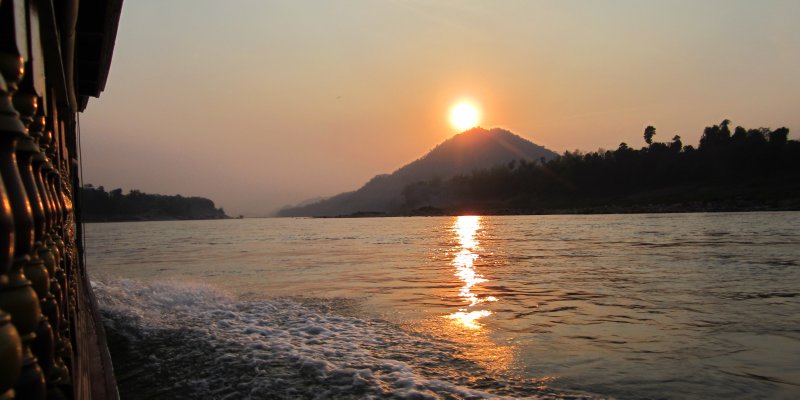 A wine and culinary side trip from Perth

Kevin’s parents were waiting for us when we arrived back to Perth from our road trip. After some discussions on timing, it was decided that the four of us would head down to the Margaret River region for some wine tasting while Anya and Justin finished up their work before the holidays. We spent three days and two nights in the Margaret River region tasting local cheeses, local wine, local venison, local sodas, local fudge, local wood fired bread, local olive oils, local breweries, local coffee, and local yogurts, don’t u know I’m loco! It was a foodies paradise! The top three highlights were visiting the Yallingup Wood Fired Bakery, having a formal coffee tasting at Yahava and wine tasting at The Growers lake side cellar door. The map below shows all the places that we tasted and traveled.

The bakery is located literally in the middle of the bush between Cnr Biddles and Mclachlan roads. There is no website, it’s not on a paved road, but they supply farmers markets and local shops with their tasty breads. The ovens are built of volcanic stones and are heated with wood fires. When we arrived, they had three varieties of bread hot out of the oven and more on their way. We admired the setup as we took notes for our future bakery. :-) 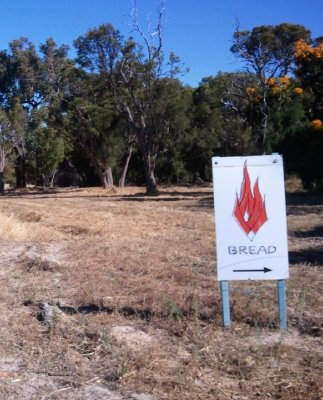 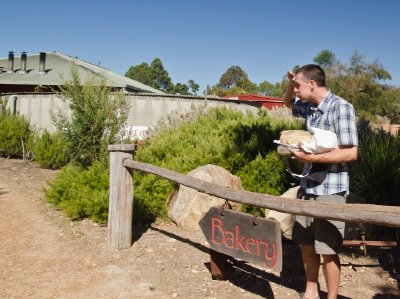 Another top highlight was hanging out at Yahava’s Koffee roasting café. While chatting with the roaster and admiring the beans, she asked us if we wanted to try some coffee. ‘Why not!’ we said as she turned us over to a barista who handed us a menu (like you would find at a wine tasting) and asked us which varieties we’d like to try! We received a detailed talk on each bean as the barista made us a mini French press of each of our selections. Very friendly bunch and a must do if you visit: http://www.yahava.com.au/ 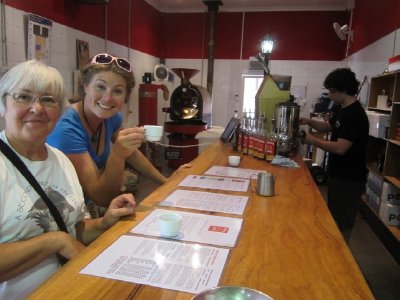 Being raised near Napa and Sonoma, and then living a short drive from Washington State’s Yakima Valley, we had some wine tasting expectations that were fortunately shattered by Western Australia’s Margaret River. The wineries were plentiful along quaint roads with sweeping views of old growth forests, yet minutes from squeaky clean white sandy beaches with snorkeling and surfing. The tastings were all free, the grounds were spectacular and the people were shockingly friendly. Our favorite cellar was called The Growers (http://www.thegrowers.com/). The owner was a blast to chat with and they had bottles from just $5! Two of their cheeky brands were “Legs” and “Shag on a Rock” (Apparently a shag is also a name of a bird in this region). 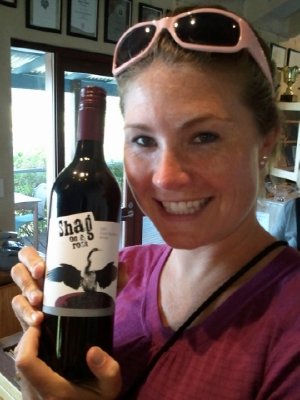 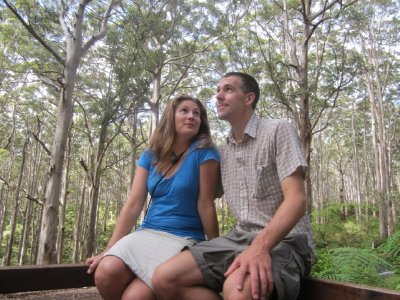 We were fortunate enough to score a two-bedroom apartment last minute with a kitchen and BBQ near the beach. Kevin and Robin used their new found Aussie BBQ skills to grill Tasmanian Salmon one night, and Margaret River Venison the next. Our apartment was located in the heart of the fire that had occurred just one month prior to our visit, and the devastation was still very evident. The street signs and lamp posts were melted and you could still smell the smoke in the air. We did a drive through the neighborhood and went up close to some of the evacuated houses that had nothing but metal shelves left standing. It really put things in perspective and had us thinking about how life can turn on a dime. Thankful and lucky to be spending the holidays with family, we packed up our new found bounty of wine and headed back to Perth. 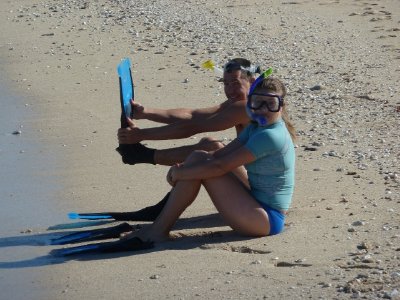 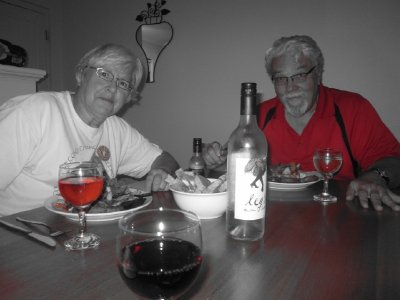